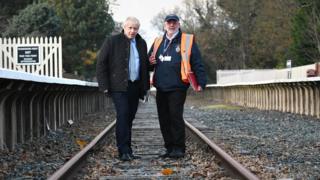 A government fund is to be launched later to restore historic railway lines closed more than 50 years ago under the so-called Beeching cuts.

The £500m promise was made in the Tory election manifesto in November.

But Labour called the plan “meaningless”, adding that £500m would reopen just 25 miles of railway.

And the Rail, Maritime and Transport union (RMT) described the funds as a “drop in the ocean”.

The government is giving funding to develop proposals for two historic railway lines – £1.5m to the Ashington-Blyth-Tyne Line in Northumberland, and £100,000 to the Fleetwood line in Lancashire.

And communities will be able to apply for some of the remainder of the £500m pot to restore their lines.

Roughly 5,000 miles of track was closed and more than 2,300 stations were axed in the 1960s, mainly in rural areas, following the Beeching report, which aimed to cut the mounting debts of the nationalised British Rail by removing duplicated routes and closing the least-used branch lines of the railway.

This became known as the Beeching cuts. The plans drew huge opposition from rural local communities, which campaigned and successfully prevented some routes and stations from closing.

In his visit to the Fleetwood and Poulton-le-Fylde line on Tuesday, which was closed in 1970, Mr Shapps is expected to say work is beginning to “undo the damage of the Beeching cuts” by investing in transport links to help local economies flourish and ensure that regions “are better connected”.

People in Fleetwood, a town of 25,000 that is hemmed in on the Lancashire coast, told us unanimously that reopening their defunct rail line to nearby Poulton-le-Fylde would be a good thing.

They say their town has lost so much over the years and they hope that restoring the railway would help regenerate the area and cut congestion on the roads.

The government is currently falling over itself to back policies that improve regional connectivity around the country. Just think of its bailout for the regional airline Flybe.

But today’s announcement is only a tentative step towards recreating a functioning railway to Fleetwood. An assessment of the economic and social case will now be carried out. The funding – £100,000 – is peanuts for now.

If the assessment is positive, more money will follow.

However, even £500m (the total funding pledged for reopening lines cut during the Beeching era) is not a big sum of money in railway infrastructure terms.

Michael Byng, a railway construction consultant, believes reopening the Colne to Skipton line near Leeds would cost around £368m on its own.

He believes that reopening the rail line to Fleetwood, which does have a tram that runs along the coast to Blackpool, would not be money well spent and other options like improving the connectivity of the tram itself should be considered.

Commenting on the proposals, shadow transport secretary Andy McDonald said: “The Conservatives claim to have been reversing Beeching cuts since 2017 despite not reopening an inch of track.

“Investing in the railway is a fantastic policy but this is meaningless without a serious funding commitment of billions of pounds.

“The timing of this announcement is also suspicious and seems designed to distract from the imminent collapse of the Northern rail franchise.”

Mick Cash, general secretary of the RMT was similarly sceptical about the government’s plans.

“RMT welcomes any investment in our railways but £500m is a drop in the ocean compared to what’s really required to connect our abandoned communities and reverse decades of cuts to infrastructure and maintenance,” he said.

“The first step is to end the chaos, profiteering and fragmentation of privatisation. Anything else is just window dressing and no one will be fooled.”