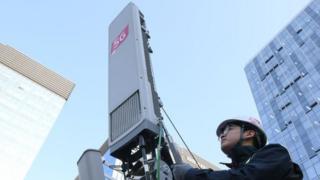 Bigger and taller mobile phone masts could be built without councils’ permission across the countryside, under a proposed overhaul of planning rules in England.

It is part of government plans to speed up the roll out of 5G networks and improve mobile coverage in rural areas.

Currently masts on public land must be no more than 25m (82ft) high but ministers want to relax these rules.

5G, which uses higher frequency waves than earlier mobile networks, would allow more devices to have access to the internet at the same time and at faster speeds.

Digital Secretary Nicky Morgan, who has launched a consultation on the plans, said “slightly taller” masts would mean they could carry more equipment and “potentially stop the proliferation of other masts – or even take away some”.

Asked if new masts could double in height, she said “Let’s ask the question and see what it is people need.”

She told BBC Radio 4’s Today programme there has to be a balance struck between the landscape and better connectivity.

“This is about broader digital connectivity. So we will obviously look to the mobile companies and those installing those infrastructures to see what it is they actually need.

“And the point is there has to be a balance struck. We all want better phone signal. We all want to be able to download things much more quickly so we have to have the infrastructure there,” she said.

“We have to make sure it’s done in a sensitive way, it respects certain areas of outstanding natural beauty.”

On the possible involvement of Chinese firm Huawei in any roll out, she said: “I would hope that we can do something by the autumn,” adding that it has to be a decision “for the long term, making sure that we keep all our networks secure”.

The consultation comes as the government launches a competition which will see up to 10 rural locations awarded a share of a £30 million fund to run trials of 5G-related technology.

The government said it hoped the scheme, called the Rural Connected Communities competition, could help stimulate investment in 5G and help countryside communities take advantage of the technology.

Similar schemes have already been set up in Orkney to remotely monitor salmon fisheries and improve the efficiency of wind farms. In Shropshire, 5G trials have been used to help the farming industry with targeted crop-spraying and soil analysis with drones and tractors.

The new funding is expected to build on projects like these and trial other uses of 5G in rural communities to help businesses and encourage innovation.

“This funding falls far short of the ambitious roll-out we need to boost our digital infrastructure nationwide.

“5G and full fibre will be the basis of the innovative, green technologies that will underpin our future economy, but the UK’s digital infrastructure is lagging embarrassingly behind”, he said.

Existing spectrum bands are becoming congested, leading to breakdowns – particularly when many people in one area are trying to access services at the same time.

5G is also much better at handling thousands of devices simultaneously, from phones to equipment sensors, video cameras to smart street lights.

Current 4G mobile networks can offer speeds of about 45mbps (megabits per second) on average. Experts say 5G – which is starting to be introduced in the UK this year – could achieve browsing and downloads up to 20 times faster.

Do you live in a rural area with poor mobile coverage? Have you experienced problems when trying to contact emergency services? Email haveyoursay@bbc.co.uk.