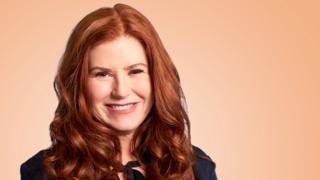 Kara Goldin created the $100m business in her kitchen

The BBC’s weekly The Boss series profiles different business leaders from around the world. This week we speak to Kara Goldin, founder of US flavoured water company Hint.

Kara Goldin says she unwittingly developed an addiction that impacted on her health – she was drinking up to 10 cans of diet cola every day.

At the time, back in 2001, she was a Silicon Valley high flyer. “I’d been drinking diet soda for years [by then], thinking I was doing the right thing,” she says.

“I was just listening to the drinks industry say ‘drink diet, and everything’s going to be great’.”

Unfortunately, Kara says that she came to the conclusion that drinking up to three and a half litres of caffeinated, artificially-sweetened liquid every day was making her feel lethargic. She also blamed the diet cola for her weight gain, and acne.

And so, after leaving her top job at tech group AOL that year to become a stay-at-home mum to her four children, Kara decided to completely change her lifestyle. She quit drinking manufactured soft drinks, and instead drank only water.

The company’s waters come in 26 flavours

She claims that in the space of two-and-a-half weeks her acne cleared up, she got her energy back, and she lost more than 20 pounds (9kg).

The sudden improvements came as a shock. “I really started to pay attention,” she says. “I’m a smart person, but I had been fooled by the word ‘diet’, thinking it was healthier and better for me.”

The experience eventually led Kara to create Hint in 2005, a soft drinks business that now enjoys annual sales of more than $100m (£81m). It specialises in bottled water flavoured solely with natural fruit. Its products do not include any added sugar or sweetener.

Using savings, she started the company in her kitchen in San Francisco. Her drink wasn’t born solely out of a desire to improve her health though. Instead boredom helped to bring it into existence.

After Kara had switched to drinking plain water, she got fed up of the taste. To make it more interesting she began adding fruit, such as strawberries, raspberries and pomegranate, and kept a jug of water with fruit pieces in her fridge.

She got the idea to turn it into a business after she searched in vain for a bottled version of naturally flavoured water that didn’t contain any sweeteners.

“I had this idea, like, ‘gosh, why isn’t anyone bottling this product?’,” she says. “I thought if I could actually get people to enjoy water again, instead of drinking all these other things that have not just sugar but diet sweeteners in, then we could actually change health.”

Singer John Legend is an investor

Her main challenge was mass producing her flavoured water without adding preservatives or sweeteners. “Frankly, we had no idea, because the industry didn’t have any idea how to develop a product without using preservatives.”

She researched how fruit juice is pasteurised to extend its shelf life, and went on to devise a similar technique for her waters, with the help of her husband Theo, a former patents attorney who is now Hint’s chief operational officer.

“We were the first fruit water brand to use a pasteurisation product to create our drinks without any kind of preservatives in them,” she says.

But while Kara had successfully worked out now to produce her drink on scale, she realised that she didn’t have any experience of running such a company. So she approached one of the global drinks giants to see if it would like to buy her start-up business.

She managed to get a phone conversation with a senior executive at the multinational in question, but as she revealed to Forbes magazine back in 2015, the talk did not go very well. Kara says that the man called her “sweetie”, and that this sexism gave her the drive to continue to run Hint herself, and make a success of it.

Her next challenge was how to break into a market dominated by the likes of Coca-Cola and Pepsi, who both own their own water brands and a host of other soft drinks. “We had no idea of the power of the large soda companies,” she says.

Kara’s first step was to persuade her local branch of upmarket supermarket chain Whole Foods to stock Hint. She dropped off a few cases at the shop just hours before she gave birth to her fourth child. They sold out overnight.

Her big break though, came thanks to her connections in Silicon Valley. When she first started Hint, she still had one eye on possibly returning to the tech sector, so she attended a job interview at Google.

“I said [at the interview], that I’m really interested in this role, but, unfortunately, I also have another interest.” She then went on to explain her plans for Hint.

The Google executive interviewing her suggested that she supply the company with her waters. So she began personally delivering Hint bottles to Google’s headquarters.

After Google started filling its fridges with Hint, other Silicon Valley companies followed suit. Facebook is said to have taken up the Hint habit after its chief operating officer Sheryl Sandberg (who is reportedly a big fan) joined the company from Google.

“Still today we’re the largest beverage in Silicon Valley,” says Kara, who is 51, and was brought up in Arizona.

Over the following years Hint steadily expanded beyond Silicon Valley. It says it is now the biggest independently-owned non-alcoholic beverage company in the US. The San Francisco-based business has 200 employees, and its investors include musician John Legend.

The drink comes in 26 flavours, including watermelon, peach and blackberry, and there are sparkling and caffeinated versions, and a kids’ range. The company has also expanded away from drinks to launch a range of natural sunscreens, and announced plans for a line of deodorants. Kara says she now hopes to expand beyond the US into other countries, including the UK.

Alex Beckett, associate director of food and drink at research group Mintel, says that flavoured water has become popular around the world because “it combines the pure associations and health halo of water, with the interesting flavours found in sugary drinks”. He adds: “Kara Goldin had the foresight and drive to recognise the long-term potential for flavoured, functional water.”

Along with running Hint, Kara says she is focused on raising awareness about health issues, such as rising levels of obesity and type 2 diabetes. “I’m trying to spread the word that as a society we’re in trouble,” she says. “I really believe that we can help consumers get their health back in all parts of the world.”