Albemarle and Bond: Defunct pawnbroker sells its loans to rival 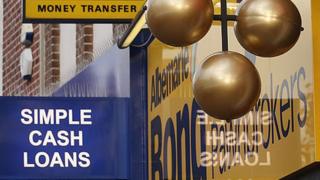 Worried customers of the defunct pawnbroker Albemarle & Bond (A&B) have been told they can collect their pawned goods from branches of rival chain H&T.

Many have faced difficulties redeeming items used as collateral for loans after 116 A&B pawn shops shut abruptly earlier this month.

Some even feared goods such as jewellery and gold would never be returned.

The firm has agreed to buy £8m worth of loans linked to customers’ belongings – known as “pledge books” – from Speedloan Finance, which had traded under the name Albemarle & Bond.

The deal will mean customers of A&B can redeem or extend their existing loans at H&T’s 248 UK pawn shops.

Pawned items at its shops were swiftly moved to a central storage facility in Oxford, giving customers little chance to redeem them. And there was outcry when many were unable to get through to the company’s helpline to find out about the whereabouts of their goods.

Many customers also did not feel comfortable about transferring large sums of cash to A&B over the phone, given its financial position, in order to retrieve their goods.

Nor did they want to have precious items returned to them by post.

Part-time cleaner Jackie Alderson pledged 10 rings and two necklaces – some of which were inherited from her late parents – as collateral for a loan from A&B .

“I tried calling them hundreds and hundreds of times but no answer,” she told the BBC. “It left me in tears.”

When she finally got through she was given the option of redeeming the items, but she did not like the idea of having to transfer £1,200 to A&B over the phone. “I wanted to pick it up in person,” she said.

The delay in redeeming her goods has already cost her £80 in additional interest on her loan, Ms Alderson said.

H&T said customers would now be able to call its helpline and get their goods sent to branches of H&T near where they live.

In the rare instances where there is no H&T shop nearby, the firm said it would send goods directly to customers.

Kohei Ogawa, the head of Daikokuya Holdings, owner of A&B, said: “We deeply apologise to customers for any uncertainty and upset caused by our decision to close in the UK.

“Once we decided to do this, we had to move quickly, in order to secure more than 35,000 customer pledges in our central secure facility.

“This agreement with H&T is a good outcome for customers and will enable them to redeem or extend their pledges with minimal disruption.”

The deal with H&T does not include A&B’s stores, which all remain shut. About 400 staff have also been made redundant, although H&T said it had hired a number of them to work in its own shops.