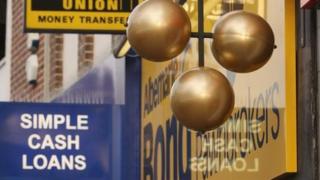 Staffing has been boosted on a heavily-criticised helpline aimed at assisting customers of struggling pawnbroker Albemarle and Bond.

All of its 116 stores were closed last week owing to “significant losses”.

It has been suggested only 10 or 15 people had been working in the company’s contact centre.

The company had employed nearly 400 staff in its network of branches, most of whom have been offered redundancy or face consultation over their jobs.

Customers had expressed their frustration after trying dozens of times to contact the company, worried about their pawned belongings and the closures of local branches.

The company told BBC News that it was “in the process” of contacting every customer via letter, text message or email, to tell them that these items were now being held in a secure centre in Oxfordshire.

“We are aware that initial issues with our phone lines have caused concern. However, all customer pledges are secure and our business continues to trade centrally from our distribution centre and Speedloan Finance remains a solvent business,” it said in a statement.

The company said it would monitor and expand its response team if required.

Customer Jackie Alderson told BBC News that she had been in tears, worried about a locket containing pictures of her late parents that had been pawned.

She was annoyed she could not redeem it from her local branch. “You think they are secure and I’ve been saving up to get them out,” she said.

The company’s initial response had been criticised by its own trade body, the National Pawnbrokers’ Association. The financial regulator has also been involved.

“We are, and will remain, in frequent contact with the firm about this matter, including about how it is ensuring customers can get their pledges back in good time upon repayment of the loan,” the Financial Conduct Authority (FCA) said on Wednesday.

Anyone wishing to contact the company can call 0800 144 8485 or email info@albemarlebond.com for help.

Earlier on Wednesday, The Guardian newspaper published a statement from Speedloan Finance’s Tokyo-based parent company, Daikokuya Holdings, to its investors saying it had “withdrawn” from the UK business.

“Since acquiring Speedloan Finance in October 2014, the company [Daikokuya Holdings] has been working to improve its management,” the statement said.

“However, despite the implementation of various measures to improve management, such as moving the head office, flattening the organisation and reducing the number of employees, the net profit for the year ended 31 March 2019 was a deficit of £7m.

“Moreover, given the increased likelihood that the UK will leave the EU, losses are expected to increase, so we have decided to withdraw from the UK business.”

How does pawnbroking work?