Aldi plans to open a new supermarket each week 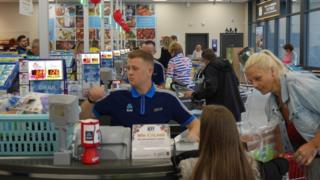 Aldi plans to open a new store in the UK every week on average for the next two years, its boss has told the BBC.

Giles Hurley said the discount retailer would invest £1bn to achieve its aim.

“The reality is that almost 50% of the population of the UK doesn’t currently shop with us and they tell us the main reason for that is that they don’t have a store near us,” he said.

Last year, the company attracted more than 800,000 new customers, adding an extra £1.1bn in sales, up 11% on the previous twelve months. But most of this sales growth is from opening new stores.

Profits for the same period fell 18%, partly due to price cuts aimed at keeping its competitive edge.

Whilst the big established grocers are opening few, if any new stores, Aldi is still expanding, stealing their customers and growing market share. And that is set to continue.

“Over the next two years we’re going to invest a further billion pounds in the UK and that shows our intent,” says Mr Hurley, Aldi’s chief executive for the UK and Ireland.

“Within Greater London, our market share is around half of what it is in the rest of the country so there’s clearly a big opportunity for us to expand the business. In the long term, we can comfortably see us opening 200-250 stores within London,” says Mr Hurley.

But will they be able to find enough locations to fit their low-cost business model?

“It’s not straightforward as you don’t have the parking spaces,” says Adam Leyland, editor of the Grocer magazine.

“It’s also harder to get good sites in London. So you have to have a very flexible model and Aldi is so formulaic as a discounter that this is harder to manage.

“But they are determined to do it and they are a very capable grocer. We’ve seen over the years how they’ve responded to the dynamics of the UK market.”

Queuing round the block

When Aldi opens a new store the shoppers come.

Here in Ruabon, on the outskirts of Wrexham, customers were queuing round the block, lured by the promise of an early freebie.

The rush was on for the so called “Aisle of Wonder” – “starbuys” included a £24.99 cordless lawnmower and a cut price vacuum cleaner.

Families were dragging six-seater wooden patio sets towards the tills. Another woman’s trolley was filled with three Mr Potato Heads, four rabbit-shaped wicker planters and a wooden wishing well for her garden.

The first customer, Ken Peters, had been waiting since 5:30am to get in: “I’m hoping for a bargain, or a free food voucher,” he says.

Aldi is already experimenting with a new, smaller, convenience store format. There are currently eight Aldi “Local” stores in Greater London, including a former Waitrose store in Camden. Aldi thinks that figure could grow to as high as 50 in the longer term.

So how long can this rapid expansion last?

“The fundamental question for Aldi, Lidl and all the other discounters, like B&M, across the retail sectors is that at some point they will reach their peak physical space,” says Patrick O’Brien, UK retail director at market research firm GlobalData.

“So they’re going to be in the same boat as their bigger rivals, going head to head for their share of the spend in their existing store estates, and as the discounters have expanded they are more often found in each other’s catchment areas, competing with each other rather than the easier job of taking spend from higher priced rivals,” he believes.

But that’s not something Aldi has to worry about right now when it’s got years of growth ahead to manage, argues Mr Leyland.

“Aldi are clearly performing very well. The crucial thing is that when they open a store people come. Aldi will only have a problem if it opens new stores and people aren’t attracted to them and I can’t see any evidence of that.”

But the Big Four supermarket chains aren’t making it easy. They’ve been improving their offer and trying to close the price gap with the discounters.

Aldi’s promise to keep prices lower took its toll on last year’s profits. But Mr Hurley, is adamant that it’s a promise he’s prepared to keep:

“Our profits did suffer as a result of the investments we made, but Aldi is not like other supermarkets. We take a very long-term view of our business and the focus is very much on our sales, our customers and our store numbers and not on short term profitability.

“The plans we put down last year were carefully considered. We’ve always said that we will offer the lowest prices in the market,” he says.

The biggest challenge right now for all the UK’s grocers is Brexit.

So does Aldi believe there will be gaps on the shelves in the event of a disorderly no deal?

“I can’t guarantee the availability of every single product,” says Mr Hurley.

“But actually that’s no different from anyone else. What we will do is shield our customers from as many ripple effects as possible. I can’t commit that prices won’t go up. I’m not alone in the industry on that but what I can guarantee is that customers will always pay the lowest grocery prices with Aldi.”

Mr Hurely said the chain was working “very closely” with its supply base.

“Because of our select range of products that’s probably a little easier than some of our competitors.

“We also believe we’re in a solid position because 75% of what we sell comes from British suppliers and manufacturers”, he says.

Aldi is increasing stocks in items like olive oil, tinned tomatoes and pasta, items which aren’t produced in the UK.

“It’s the biggest challenge for the whole food industry at the moment. Everyone is working crazily to come up with solutions.

“Aldi may have fewer products to worry about but it’s a double-edged sword because if one product isn’t getting through it’s harder to flex it. And although they’re very competitive, they’ve struggled to manage inflation like everyone else.”

Whatever happens, Aldi is clear that Brexit won’t change its expansion plans.

This business, along with Lidl, has had a profound effect on the UK grocery market.

Aldi alone took £7bn of sales in the last year that would otherwise have gone to its rivals, according to the research, data and insight consultancy, Kantar.

As long as it is continuing to open new stores, it’s likely to be a hugely disruptive force.