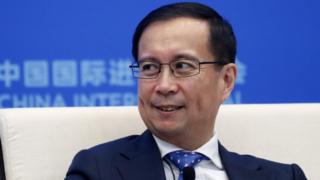 That would make it the biggest share sale this year, according to Dealogic.

The move is seen as a boost for Hong Kong, diluting fears that protests have tarnished its financial reputation.

The city has grappled with anti-government protests for nearly five months and violent clashes escalated this week .

“During this time of ongoing change, we continue to believe that the future of Hong Kong remains bright,” Alibaba Chairman Daniel Zhang said.

He described the city as “one of the world’s most important financial centres”.

Mr Zhang – who succeeded Jack Ma to take Alibaba’s top job earlier this year – said the company hoped to “contribute” to the future of Hong Kong.

The sale could knock Uber off the top spot as this year’s biggest IPO, according to Dealogic data. The ride-sharing firm raised $8.1bn in its New York float in May.

Over the years, Alibaba has grown from an online marketplace into an e-commerce giant with interests ranging from financial services to artificial intelligence.

The company said the new listing will allow investors across Asia to “participate in Alibaba’s growth,” as it seeks to tap “substantial new capital pools” in the region.

The Hangzhou-based firm had originally considered a Hong Kong IPO in 2013, but opted for New York after failing to secure regulatory approval in the Asian territory.

The move to go ahead with the share sale in Hong Kong comes after Alibaba reportedly delayed plans to list there earlier this year, amid ongoing unrest and the US-China trade war.

The long-running protests have hurt the economy, which has fallen into recession, and knocked business confidence in the city.

The protests started in June against plans to allow extradition to the mainland – which many feared would erode the city’s freedoms.

Hong Kong is part of China, but as a former British colony it has some autonomy and people have more rights.

While the extradition plans were withdrawn in September, the demonstrations have continued, with protesters calling for an independent inquiry into alleged police brutality, and democratic reform.