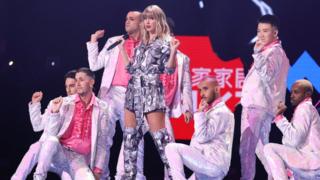 The world’s biggest online shopping event raked in 100bn yuan ($14bn; £11bn) in sales in just over an hour of trading.

It marked Alibaba’s first Singles’ Day since the exit of its colourful founder Jack Ma.

He was replaced as executive chairman by Daniel Zhang earlier this year, after Mr Ma stepped down to focus on philanthropy and education.

Alibaba said sales reached $1bn in a little over one minute of trading on Singles’ Day.

The total value of merchandise sold hit the 100bn-yuan mark around 40 minutes faster than last year, the firm said.

That put Alibaba on track to post a fresh sales record for the shopping event, beating last year’s $30.8bn.

What is Singles’ Day?

Alibaba invented the occasion to celebrate the unattached as an antithesis to the romantically involved on Valentine’s Day.

Over the years, Alibaba has grown from an online marketplace into an e-commerce giant with interests ranging from financial services to artificial intelligence.

The company is now valued at $480bn, according to Forbes.

The shopping event comes as Alibaba eyes a public listing in Hong Kong.

Reports suggest the firm – which is already listed in the US – may announce plans to proceed with a multi-billion dollar Hong Kong listing as early as this week.