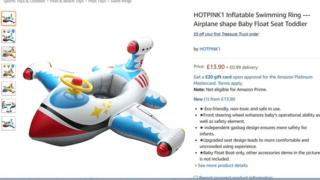 One of the products flagged up by Which? on Amazon that appeared to have been declared unsafe by the EU

Which? says that Amazon and eBay have failed to stop toys from being listed for sale which appear to have been declared unsafe by the EU.

The consumer group is asking the next government to make online marketplaces legally responsible for stopping dangerous products from being listed.

Which? found products for sale which it believed posed a risk to children.

EBay removed 12 flagged products, while Amazon took down the five listed for sale.

Which? looked at toys which had been registered as dangerous by the EU’s safety gate system since 2017.

The scheme flags products which have been recalled, withdrawn from sale or stopped at the border over safety worries.

The toys on eBay included toy slime, a Transformers helmet and a cartoon helicopter, all of which seemed to be very similar to dangerous products.

The safety risk in the toys across both sites included high levels of chemicals in some toys, too much lead in others and the risk of intestinal blockage from parts in others.

Earlier in the year, the British Toy and Hobby Association raised similar concerns – warning that one in five toys it found sold on Amazon and eBay were dangerous for children.

Which? tested out Amazon Marketplace itself by listing for sale a squishy toy, which had been recalled in October 2018 because it posed a risk of choking or suffocation.

The toy remained on Amazon for two weeks before Which? withdrew the listing itself.

It also put on the site a soft fabric car seat, which are illegal in the UK.

Online marketplaces are not currently responsible for making sure that the products sold on their sites are safe.

Caroline Normand, Which? director of advocacy, said: “It’s clear that consumer protections have not kept pace with the changes to the retail industry, and it is not acceptable for marketplaces to pass the buck for the responsibility of the items sold on their sites by simply pointing the finger at sellers.

“The next government must make marketplaces legally responsible for preventing unsafe products from being sold on their sites, establish clearer requirements for taking down dangerous products and ensure better enforcement is in place to keep consumers safe.”

EBay told Which?: “Sellers aren’t permitted to list dangerous products on eBay, or items that have been recalled. The listings flagged have been removed and we have requested that sellers contact customers with a safety notice and their refunds policy.”

And an eBay spokesperson told the BBC: “Consumer safety is our number one priority and we invest significantly in keeping our marketplace safe and educating users on product safety.

“Between October 2018 and October 2019 our filters automatically blocked five million listings from entering the marketplace on product safety grounds.

“While eBay goes beyond the legal requirements for safety, we are constantly working to improve the systems and policies already in place on our site and welcome further clarification on guidelines so we can continue to play our part in ensuring consumer safety.”

Amazon said: “All sellers must follow our selling guidelines, and those who do not will be subject to action including potential removal of their account. The products in question are no longer available.”

It also said its first objective is to block suspicious, unsafe, or non-compliant products from being listed.

It told Which? that it uses proprietary technology to screen partners and block suspicious businesses, as well as to check product listings, and has teams of compliance experts who conduct manual checks.