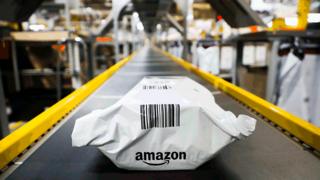 Amazon sales soared over the Christmas season, rising 21% from the prior year, in sharp contrast to weakness reported by other retailers.

The e-commerce juggernaut said it earned $87bn (£66bn) in sales in the last three months of the year, well ahead of analyst expectations.

The news sent the firm’s shares up more than 10% in after-hours trade.

Amazon said it earned $3.3bn in profit, up from $3bn a year ago – despite spending heavily on high speed delivery services for its Prime members.

Boss Jeff Bezos said the firm now had more than 150 million Prime accounts globally – up 50% from its last disclosure in 2018.

“Prime membership continues to get better for customers year after year. And customers are responding – more people joined Prime this quarter than ever before,” he said.

Other retailers, including Target and Macy’s, reported holiday sales that missed forecasts.