Amazon hit by Black Friday walkouts and protests in Europe 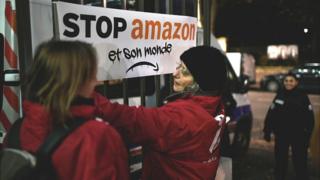 Workers at six Amazon distribution centres in Germany have staged a Black Friday walkout in a dispute over pay and conditions.

The union Verdi, which called the strike, said its members’ hard work could not be bought for “knock-down prices”.

It wants Amazon staff to be part of the German retail industry’s collective bargaining structure.

The strike came as protesters in France targeted Amazon centres.

At the online retailer’s depot in Bretigny-sur-Orge, south of Paris, dozens of climate change activists blocked the path of lorries trying to enter the site.

Other protesters converged on Amazon’s French headquarters in Clichy, north of Paris.

The activists held banners with slogans including “Stop Amazon and its world” and “Amazon: for the climate, for employment, stop expanding, stop overproduction”.

The strike is due to last all weekend, with employees at some centres staying away until early Tuesday morning.

Amazon denied that its staff were badly treated, saying that it was “a fair and responsible employer” with pay rates at the upper end of what was normal for comparable jobs.

It said deliveries would not be delayed, because “the majority of workers are taking care of customers’ orders as normal”.

Verdi has organised a number of strikes at Amazon since May 2013.

In the past, Amazon has drawn on other depots throughout Europe to help meet delivery schedules.