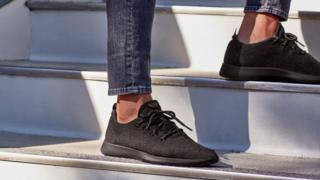 Allbirds’ Wool Runners are made from New Zealand merino wool

Amazon has been accused of creating a shoe “strikingly similar” to one designed by environmentally-friendly footwear manufacturer Allbirds.

They said Allbirds was “flattered” at the similarities between the products and offered to help make Amazon’s shoes “match our approach to sustainability”.

Amazon has denied infringing the US shoe firm’s designs.

Allbirds woollen trainers have become trendy among celebrities, with Oprah Winfrey, Matthew McConaughey, Courteney Cox and Gwyneth Paltrow all having reportedly been seen wearing them.

The firm says its shoes’ carbon footprint is 60% smaller than typical synthetic shoes and that it uses less material in its packaging.

The shoes that sparked the row are Amazon’s 206 Collective wool blend sneakers, which Allbirds says are similar to its wool runners.

Allbirds’ shoes are made from New Zealand merino wool, whereas Amazon’s shoes – which are for sale on its US website – are about half the price and made from a mixture of wool, polyester, nylon and viscose.

The BBC has contacted Amazon for a comment, but last week the e-commerce giant told Business Insider: “Offering products inspired by the trends to which customers are responding is a common practice across the retail industry. 206 Collective’s wool blend sneakers don’t infringe on Allbirds’ design.

“This aesthetic isn’t limited to Allbirds, and similar products are also offered by several other brands.”

Allbirds was founded by Mr Zwillinger and Mr Brown in 2014. The firm is now reportedly valued at more than $1bn (£777m) and has entered the British market by opening a store in London’s Covent Garden.

In their letter to Mr Bezos, posted on the Medium website, Mr Zwillinger and Mr Brown said: “As we’ve done with over 100 other brands who were interested in implementing our renewable materials into their products, including direct competitors, we want to give you the components that would make this shoe not just look like ours, but also match our approach to sustainability.

“In partnership with Braskem, we successfully created the world’s first green EVA – a sustainable version of the foam used on the bottoms of sneakers (including yours), and one of the industry’s most ubiquitous materials.

“After all this work, we decided to give it away. You can use it. We want you to use it.

“Customers value companies that are mindful of the planet and profits, and we believe the most powerful businesses in the world, such as Amazon, should lead on these issues, and will be rewarded for doing so.

“Please steal our approach to sustainability.”

Allbirds has committed to being a carbon neutral company across its whole supply chain.