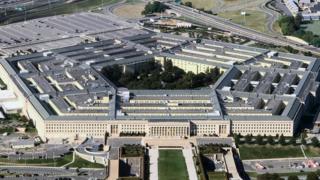 A judge has hit pause on a major US government contract in a win for Amazon, which had challenged the award.

The tech giant, which had been favoured to win the cloud computing deal, sued last year after the US Defense Department gave the opportunity to arch-rival Microsoft instead.

Amazon has accused officials of bowing to pressure from Donald Trump.

The US president has often attacked Amazon and boss Jeff Bezos, who also owns the Washington Post newspaper.

Amazon had asked the court to block the Joint Enterprise Defense Infrastructure contract, known as Jedi, which is worth up to $10bn over 10 years. The company is also seeking to question Mr Trump as part of the lawsuit.

On Thursday, Judge Patricia Campbell-Smith of the US Federal Claims Court agreed to the first demand, ordering the US to halt its Jedi activities, which are aimed at making the US Defence Department more technologically agile.

She also ordered Amazon to set aside $42m for costs if future proceedings found she was wrong to have issued the injunction.

Amazon declined to comment. In seeking the injunction the firm had said it was “important that the numerous evaluation errors and blatant political interference that impacted the Jedi award decision be reviewed”.

Microsoft said it was “disappointed with the additional delay”.

“We have confidence in the Department of Defense, and we believe the facts will show they ran a detailed, thorough and fair process,” it said.

The contract in question, for cloud computing services for the military, is among the Defense Department’s biggest and it drew legal challenges over the procurement terms even before it was awarded.

Among other things it is intended to improve the military’s remote access to data and technology, and help it host classified military secrets.

Amazon and Microsoft are industry leaders among cloud services providers.

Last year, Mr Trump told reporters that the US was looking closely at the contract, noting that he had been getting “tremendous complaints” from several companies about it.

The Defense Department has denied claims of bias.

It is not the first time a company has accused Mr Trump of improperly swaying the federal government’s decision-making due to his objections to media coverage.

Telecoms operator AT&T made similar claims after the US took action to block its takeover of Time-Warner, which owns CNN. The court blocked the firm from pursuing White House records, but ultimately approved that deal on other grounds.