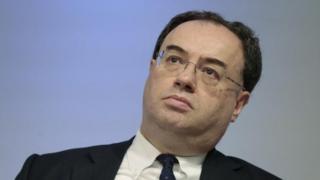 After a lengthy search for the next Bank of England governor, the Treasury has gone back to the candidate it first thought of.

As far back as June, Andrew Bailey was being spoken of as the favourite for the job.

However, his time as head of the City watchdog, the Financial Conduct Authority (FCA), has been marked by a number of high-profile controversies.

These included the FCA’s handling of complaints into the Royal Bank of Scotland’s treatment of small businesses in the aftermath of the financial crisis.

The FCA has also faced criticism in recent months over the demise of the flagship fund of one of the UK’s best known money managers, Neil Woodford.

Many thought these issues might have harmed his chances for the top job. But in the meantime, other big names cited as possible candidates for the governorship fell by the wayside and Mr Bailey emerged as the victor.

Mr Bailey, 60, is married with two children. He was born in Leicester and went to Wyggeston Grammar School for Boys.

He studied at Queens’ College, Cambridge, where he gained a BA First Class Honours in history and PhD in economic history.

He then became a research officer at the London School of Economics, before working at the Bank of England from 1985 to 2016.

He was chief cashier from January 2004 until April 2011, which meant his signature appeared on billions of UK banknotes.

During the financial crisis, he was also responsible for the Bank’s special operations to resolve problems in the banking sector. As a result, he was involved with the 2008 government rescue of Royal Bank of Scotland and HBOS.

“The [RBS] treasurer, John Cummins, came in and I thought he was going to have a heart attack… and he looked at me and said, I need £25bn today, can you do it? I said, ‘Yes, I can do that,'” Mr Bailey said in an interview.

He then served as the Bank’s first deputy governor for prudential regulation from April 2013 to July 2016.

He is highly thought of by colleagues and civil servants. Mark Carney, the man he will be succeeding as governor, has described his work in helping to manage the financial crisis and then to develop the post-crisis regulatory framework as “exemplary”.

Former Permanent Treasury Secretary Lord McPherson described Mr Bailey as the most able and competent Bank of England official he had ever worked with.

Lord McPherson added that while Mr Bailey would not make waves for the government, he had the backbone to stand up to it.