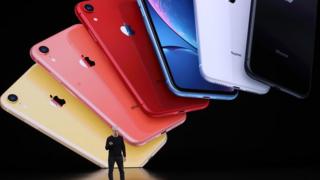 Apple’s business is being tested by ongoing weakening in its iPhone sales.

Apple’s profit and revenue for the full financial year fell for the first time since 2016, weighed down by the iPhone declines.

The fall extended a streak of declines and hit the firm’s profits in the quarter, which slipped about 3% year-on-year to $13.7bn.

However, Apple still managed deliver revenue growth, lifted by accessory sales and its services business, which includes the app store and Apple Pay.

Apple boss Tim Cook, who has been working to make Apple’s business less reliant on its phones, hailed that gain.

But he also hastened to reassure investors that the declines in iPhone sales are slowing, thanks to the popularity of the firm’s latest model – the iPhone 11.

“It’s early but the trends look very good,” he said. “We are bullish.”

Mr Cook added that the firm’s other businesses were healthy – sales of wearables, such as ear phones and watches, surged by more than 50% for the quarter ,while services revenue jumped 18% year-on-year.

Mr Cook said his optimism is baked into Apple’s relatively bright forecast for the upcoming quarter, which includes the festive season – typically a time that sees many hardware purchases.

The firm said it expected revenue growth in the quarter of as much as 6%, which would be above analysts’ expectations.