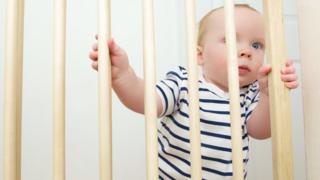 Argos has issued a recall for some Cuggl brand baby gates after tests showed they were faulty.

The catalogue company said customers should stop using them and return them to one of their stores for a refund.

The firm said some gates’ automatic closure feature did not always work and that some gaps between metal bars were too wide, “which may result in a child getting trapped”.

Argos said some of the gates could break “under high impact”, such as regular banging or kicking.

“Please be assured that no other safety gate is affected by this issue,” Argos said in a statement. “We apologise for any inconvenience caused.”

Argos created the Cuggl brand in 2017, selling cots, pushchairs and highchairs as well as safety gates.

Last month healthcare giant Johnson & Johnson recalled 33,000 bottles of baby powder in the US, after regulators found trace amounts of asbestos in a bottle purchased online.

In April toymaker Fisher-Price recalled nearly five million of its Rock ‘n Play Sleepers in the US after reports linked the product to dozens of baby deaths.

Fisher-Price had warned customers to stop using the sleeper once infants could roll over.