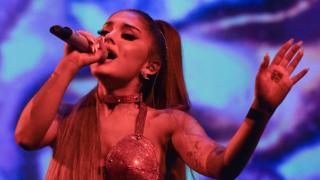 Singer Ariana Grande is asking for $10m (£8.3m) in damages from Forever 21, saying the retailer “stole her name” to promote its clothing and beauty products.

She said the firm published at least 30 “unauthorised” images and videos that suggested she had endorsed the brand.

It also hired a model with an “uncanny” resemblance to Ms Grande for some of its social media posts, she said.

Her lawsuit comes after a breakdown in talks over a joint marketing campaign.

Ms Grande said the firm, which has stores in more than 50 countries around the world, approached her in 2018 about endorsement.

However, she said talks broke down because “the amounts that Forever 21 offered to pay for the right to use Ms Grande’s name and likeness were insufficient for an artist of her stature.”

“Rather than pay for that right as the law requires, defendants simply stole it,” she said in the complaint, which was filed in federal court in California.

The “misleading campaign” occurred primarily in January and February of 2019, before the release of Ms Grande’s album, ‘Thank U, Next’, according to the suit.

Ms Grande is a Grammy Award winner and best-selling singer. She also has more than 200 million followers on Instagram and Twitter.

Billboard named her “Woman of the Year” in 2018 after she raised $29m for victims of the Manchester suicide bombing attack, the lawsuit said.

Ms Grande is one of a long line of celebrities to sue over trademarks.

For example, in July, Kim Kardashian-West won $2.7m in damages after accusing fashion brand Missguided USA of ripping off her outfits and using her name to sell clothes.

John Coldham, a partner at law firm Gowling WLG, said the Ariana Grande case “should act as a stark warning to brand owners to be very careful about using celebrity images and ensuring they are not implying an endorsement.”

Forever 21 did not immediately respond to a request for comment.