Artificial eyes: How robots will see in the future 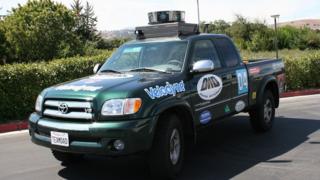 It’s never good when a giant of the technology business describes your product as “a fool’s errand”.

But that’s how Tesla’s chief executive Elon Musk branded the laser scanning system Lidar, which is being touted as the best way for autonomous cars to sense their environment.

In April he said Lidar was “expensive” and “unnecessary”. He believes that cameras combined with artificial intelligence will be enough to allow cars to roam the streets without a human driver.

Lidar emits laser beams and measures how long they take to bounce back from objects, and this provides so-called point-clouds to draw 3D maps of the surroundings.

These can be analysed by computers to recognise objects as small as a football or as big as a football field and can measure distances very accurately.

Despite Mr Musk, some argue these $10,000 (£7,750) pieces of kit are going to be essential. “For a car to reach anything close to full autonomy it will need Lidar,” says Spardha Taneja of Ptolemus Consulting Group, a mobility consultancy.

But why are experts so divided, and how should investors judge this potential gold mine?

Famously, Elon Musk is not a fan of Lidar

Lidar (light detection and ranging) technology is not new – the Apollo 15 mission used it in 1971 to map the Moon. But its breakthrough came in the mid-2000s when Darpa, the research division of the US military, started its annual Grand Challenge, a race for autonomous vehicles.

David Hall who took part in the first race in 2004, soon realised Lidar’s potential. He used the manufacturing capacity of his company Velodyne to build them for other participants.

By 2007 five of the six teams to finish the race employed Velodyne’s system. These rotating lasers, so-called spinners, were mounted on car-roofs to provide 360-degree vision.

Autonomous vehicles have other ways of sensing what’s around them, but they all have weaknesses.

The US military was an early enthusiast for Lidar

“The drawback of Velodyne’s original Lidar was that it was bulky, its spinning parts were fragile and it cost more than $100,000,” explains Rudy Burger, managing director of Woodside Capital Partners, an investment bank which specialises in technology.

Since then the challenge has been to make Lidar units that are smaller, sturdier and cheaper.

Today Mr Burger counts around 100 Lidar firms. These include car manufacturers like GM and Ford, the GoogleX spin-off Waymo and numerous start-ups, 11 of which have raised more than $100m by his account. There is also the Chinese tech giant Alibaba that has developed a Lidar-based delivery bot.

Mr Burger says the big question now is which system will be put into mass-produced cars.

Manufacturers have to decide whether they want Lidar with more expensive fibre lasers which pump out more energy and have range even in wet weather.

This Lidar based robot could work as a delivery courier or an automated coffee vendor, says Alibaba

They also have to choose between Lidar units with moving parts and others which don’t – so-called solid-state systems.

“Car manufacturers increasingly prefer those for their durability, lower prize and smaller size which allows smoother aesthetics,” says Ms Taneja. She says a solid-state, long range Lidar costs from $4,000-25,000, but that this price will drop by some 40% by 2022.

However, because solid-state devices have a narrow field of vision, cars will need several each. Given these costs, car manufacturers are still testing different technologies and other than Velodyne no manufacturer has so far sold Lidars in big numbers, she says.

One of the start-ups hoping to do just that is Blickfeld launched in Munich in 2017. “We entered the market late, but the advantage was that we could assess it,” says co-founder Florian Petit.

“So we opted against the revolutionary approaches of many Silicon Valley firms,” and instead wondered “how low can we push the price for a mass-produced system?” he says.

Blickfeld uses off-the-shelf lasers and sensors. Its main improvement has been to design an unusually large mirror, directing more light onto the photo-detector and thus increasing the range of Lidar to 250m (800ft) even with a relatively cheap laser.

Its Lidar is small enough to fit into the rear mirror of a car and Blickfeld’s new assembly line will produce a few thousand units a year. It claims this could be scaled up to an annual capacity of 200,000 – with a possible price tag of just $275 (£210).

Blickfeld already sells Lidars to various firms. They are used to survey cars for parking facilities and traffic control, to run so-called sense-and-avoid systems preventing drone collisions and to monitor fences at labs, banks or airports.

“Lidars produce 3D maps that are easier for computers to analyse and are thus less prone to triggering false alarms than cameras,” says Mr Petit. Still, his main target remains the car industry.

How large this market will become for Lidar is controversial. Tesla’s Elon Musk hopes the cheaper option of improved cameras linked to higher definition radars will suffice.

Others such as Rudy Burger expect the market to temporarily split into two: First, robo-taxis will drive autonomously in crowded cities. In that case even expensive Lidars would still be cheaper than the cost for a driver.

However, for private cars where cost is often the dominant factor the Lidar market is likely to take longer to evolve and may ultimately be replaced by a combination of cameras and radar, he says.

Despite such delays Ms Taneja expects Lidar will become necessary for any car with high levels of autonomy. That means any up-market vehicle now in development for sale in the next few years that will allow drivers to temporarily turn their attention elsewhere. “You just need this extra level of perception for safety reasons.”

How appealing that market is to Lidar producers becomes apparent from Ms Taneja’s breakdown: of the overall price for an advanced self-driving system, 60% goes to Lidar, 30% to the processing unit and 10% to high definition maps, AI software and satellite navigation.

The global Lidar market is forecast to reach $731m in 2025 – little wonder, investors and inventors are getting excited.