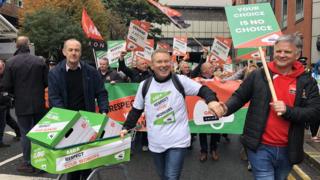 Asda workers protesting against a new contract have marched to the supermarket’s headquarters to hand in a 23,000-signature petition.

The petition was pushed through Leeds in a shopping trolley by objectors waving flags and blowing horns.

Demonstrators fear they will be sacked if they do not accept the new contract that will see them lose paid breaks.

Asda said the contract “ensures we are able to adapt to the demands of the highly competitive retail industry”.

When the crowd reached Asda’s headquarters, they passed the petition to a member of staff who wheeled it away into the building

Hundreds of protesters travelled from around the country to Leeds, described as the “birthplace” of Asda.

Debbie Jones, 51, from Runcorn, has worked for the firm since she was 16. She said: “I just feel it’s an injustice.

“If I don’t sign the contract I’ll be sacked after 35 years, I don’t feel any respect or any loyalty.

The protests follow the move to introduce a new agreement called contract six, which introduces unpaid breaks and a requirement to work on bank holidays.

Neil Derrick, GMB union’s regional secretary for Yorkshire and North Derbyshire, said: “The founding fathers of Asda would be here marching with us today if they weren’t spinning in their graves about the way Asda is treating its staff.”

While Labour MP for Leeds North West, Alex Sobel, described the contract as a “stain on Asda and its history”.

Asda, which is owned by US retail giant Walmart, said the contract increases the take-home pay of more than 100,000 employees through an investment of more than £80m and ensures everyone doing the same job is on the same terms and conditions.

“We understand that change is never easy, but we are determined that Asda remains a sustainable business for its customers and colleagues – now and in the future,” a spokesman said.

Asda said it will not be asking workers to “constantly move the time they work, their days or departments”