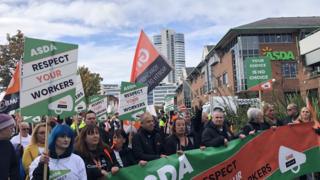 Many Asda supermarket workers face the sack this weekend unless they sign new contracts that include the introduction of unpaid breaks for 100,000 staff.

Workers have until the end of Saturday to agree the terms, due to come into force after a 12-week consultation.

Asda insists most workers will be better off, but the GMB union says the new “inflexible” terms will cause upheaval, especially for female staff.

It’s thought about 2,000 staff have yet to sign, but possibly many more.

Asda said reports that up to 12,000 of its hourly-paid workers had not yet agreed the new terms were “inaccurate”, but declined to disclose the latest figure.

Under the changes, paid breaks will be scrapped, working bank holidays will become compulsory – although festive holidays will be voluntary – and there will be changes to night shift payments.

Neil Derrick, GMB regional officer for Yorkshire and North Derbyshire, said staff would also be forced to attend work at shorter notice, disrupting the life of carers or people doing the school run.

Leeds-based Asda is increasing hourly pay rates. However, Mr Derrick said it was not the money that mattered for many staff, but the inflexibility of the new working patterns.

“Many staff cannot sign because of upheaval to their domestic life. Others have signed just to get them through Christmas or until they can find new jobs,” he said.

“I’ve not met anyone who thinks they will be better off in terms of working life. There will be a disproportionate impact on women.”

Mr Derrick said the union would support sacked employees in any legal battle against Asda. Labour’s leader Jeremy Corbyn has said he “stands in solidarity” with Asda workers.

This week, Asda announced it would increase employees’ basic hourly pay from April, a move that the GMB said shows the supermarket is desperate to woo over disgruntled staff before the deadline.

The supermarket said it would raise its basic rate for its hourly-paid retail employees to £9.18 from 1 April next year, following an increase to £9 from 3 November.

In London, which has an additional allowance to reflect the higher cost of living, basic pay will increase to £10.31 per hour.

The retailer, owned by Walmart, acknowledged this week’s annual pay announcement for April rises had come earlier that usual.

An Asda spokesman said the new contract “represents an investment of over £80m and an increase in real pay for over 100,000 of our hourly paid colleagues”.

He added: “We have been clear that we don’t want any of our colleagues to leave us and whilst the vast majority of colleagues have chosen to sign the new contract, we continue to have conversations with those who have chosen not to, to try and understand their concerns.”

While Asda accepted that change was “never easy”, it was important that the company adapted to changes in the market and competition, he said.

The company has won backing from former Sainsbury’s chief executive Justin King, who used to work at Asda.

He told the BBC that the new retail environment, where the working practices of some online retailers were “almost Victorian”, had made life extremely competitive for traditional firms.

“All legacy retailers – and Asda are one – have some legacy arrangements with their workforce which simply don’t reflect the modern world that we’re in.

“Many online retailers don’t pay their workers anywhere near as well as the mainstream retailers,” he said.

To compete, it was necessary to take tough decisions. “Sometimes you have to do the right thing for the whole business.”