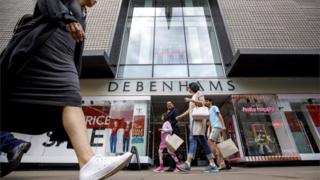 A deal that saved Debenhams from administration will be challenged in the High Court this week, putting the retailer’s future back into doubt.

A commercial landlord – backed by Mike Ashley’s Sports Direct group – is fighting the plan which saw Debenhams agree to shut 50 stores and secure rent cuts on others in May.

If successful, it could lead Debenhams to fall back into administration.

The retailer said it was “extremely confident” the action would fail.

Earlier this year, Debenhams fell into the hands of its lenders as part of an administration process, wiping out Mr Ashley’s near-30% stake in the company.

Shortly afterwards the creditors approved the rescue deal – or company voluntary agreement (CVA) – which will see landlords take rental cuts of up to 50%.

Combined Property Control (CPC), which owns the freehold to six Debenhams stores, including Southampton, Harrogate and Folkestone, argues that the CVA was not run properly and should be overturned.

In a twist, the legal case – which begins on Monday – is being funded by Sports Direct, which launched – but then withdrew – a similar challenge in July.

Of the latest legal case, a spokesperson for Debenhams said: “We remain extremely confident this challenge is without merit and expect it to fail.

“In the meantime, we are progressing with our restructuring, which was approved by the vast majority of creditors, including over 80% of landlords.”

The retailer said it would appeal if it lost the case.

Before it was rescued, Britain’s biggest department store chain had been hit by a succession of profit warnings amid a retail slowdown on the High Streets.

The firm, which currently has 166 stores and employs about 25,000 people, hopes its CVA and recent changes to management will get it back on track.

If CPC wins its case, however, the restructuring plan could unravel.

According to reports over the weekend, Debenhams has asked advisers at professional services firm Deloitte to come up with contingency plans should it lose the case and its CVA be derailed.