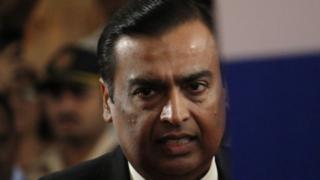 A conglomerate run by Asia’s richest man has started rolling out a challenger to Amazon in India.

Mukesh Ambani’s Reliance Industries said it has been inviting people to sign up to its grocery delivery service.

The company is aiming to use its massive mobile phone customer base as a springboard for the business.

The new e-commerce venture is emerging as a major challenger to India’s existing online retail giants.

JioMart says it offers “free and express delivery” for a list of grocery goods, which currently numbers some 50,000 items.

Unlike its rivals, JioMart will connect local stores to customers via an app rather than providing and delivering the goods itself.

India’s online grocery market is in its infancy – currently estimated to be worth around $870m a year, with just 0.15% of the population using such services.

However, analysts predict the sector could see annual sales of around $14.5bn by 2023.

India’s e-commerce market is currently dominated by Amazon and Flipkart, which is owned by Walmart.

Both companies suffered a setback last year when the Indian government introduced new laws that restrict foreign-owned online retailers from selling goods from their own subsidiaries.

This helped give Indian companies, which are not affected by the new rules, an edge over their foreign rivals.

Mr Ambani is the chairman and largest shareholder of Reliance Industries, with an estimated fortune of more than $60bn (£45bn).

Reliance Industries’ core business is oil refining but it also has major investments in other sectors including retail and telecoms.