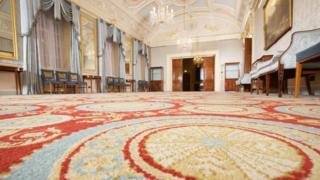 Axminster Carpets is in rescue talks with potential buyers, as first reported by Sky News.

The 265-year-old royal warrant holder filed a notice of intention to appoint administrators on Wednesday.

Jonathan Young, its managing director, said he was “encouraged by the level of interest in investing in our brand”.

Administrators Duff and Phelps are on standby as the company tries to avoid collapsing for the second time in seven years.

Up to 90 jobs are thought to be at risk in Devon if the company enters administration.

Mr Young also said that working on a “sustainable future” for the company was “important for the local town, our employees, suppliers and customers who value the quality of craftmanship”.

A controlling stake in the historic carpet maker was bought by a Yorkshire-based wool supplier in 2016.

Axminster Carpets was previously rescued in 2013. It had gone into administration, also overseen by Duff and Phelps, but was bought out by a consortium led by the private investor Stephen Boyd.

The firm lost about 300 of 400 jobs at the time. It had been one of the county’s largest private employers.

The origins of the luxury carpet maker can be traced back to Thomas Whitty, who began making carpets and rugs in the town in 1755 using what became known as the Axminster method of weaving.

The first carpets were bought by the likes of King George III and Queen Charlotte, who visited the factory.

The family firm went out of business in the 1830s, but the tradition was revived in the town in 1937, when Harry Dutfield, the son of a Glasgow carpet designer, founded the current company.

Its products are now at home in Clarence House, the Brighton Pavilion and Twickenham Stadium, according to its website.