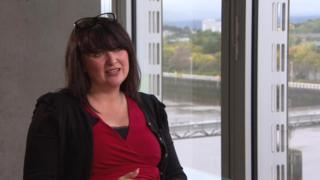 Gayle Fitzpatrick believes the fumes she inhaled have affected her health

Passengers on a British Airways flight to Valencia which filled with smoke mid-air have told the BBC they are still experiencing breathing difficulties two months on.

Gayle Fitzpatrick, 40, from Glasgow says she is breathless walking up-hill.

“I don’t smoke, I’ve never had any health concerns. So I know [it] must be directly attributable to that flight and whatever I inhaled,” she says.

BA said it was waiting for the outcome of a Spanish air accident investigation, which is examining why the cabin of flight BA422 to Valencia in August filled with smoke shortly before landing.

In the meantime Gayle has been referred by her doctor to a respiratory specialist, as has fellow passenger, Stephen McConnon.

Mr McConnon says he has sores in his throat and is often “struggling breathing.”

Before the flight he went to the gym on a regular basis. However he says his performance at the gym has subsequently “fallen off a cliff” and his latest prognosis was “really not good,” he says.

Mr McConnon’s colleague Frank Sweeney, who was with him on the flight, and who is also suffering breathing difficulties, says he wants answers.

“I want to know first of all, what did we breathe in? Was the plane maintained properly? Should it have been in the air?”

In a statement British Airways said it “would never operate an aircraft” if it believed “it posed any health or safety risk to customers or crew.”

The airline said it supported customers after the incident and it continues to offer “ongoing help and support.”

“We are legally unable to comment on causes until the Spanish air accident investigation is concluded,” the airline said.

Although it isn’t confirmed, pilots and cabin crew have told the BBC they have no doubt that the incident on the flight to Valencia was a “fume event”.

The air you breathe on board virtually every model of airliner (except for the Boeing 787) is sucked in via the engines, where it is compressed, after which it flows into the cabin.

If oil or hydraulic fluid leaks it can contaminate the air supply.

Passenger, Frank Sweeney, who was a passenger on board the BA flight to Valencia, says the fumes were “acrid”.

“It wasn’t like a wood smoke or a fire smoke, it was more chemical,” he says.

Fellow passenger Gayle Fitzpatrick says at the beginning of the flight there was a “really strange chemical smell”.

If it is confirmed that it was a fume event then the thick, visible smoke and the fact the plane had to make an emergency landing would make it an extreme case.

Pilots and cabin crew say there have been a number of less severe events on BA flights in recent weeks. None have been confirmed as fume events, but they have been reported as potential ones.

According to an internal BA report seen by BBC News the crew on a flight into Gatwick earlier this month reported “a damp smell” mid-flight.

That type of smell is often associated with fume events.

The memo states that the pilots removed their oxygen masks on arrival and the first officer “proceeded to vomit on two occasions.”

The captain “proceeded to A&E the next morning after experiencing a strong headache” the memo said.

After a similar smell was detected by the crew on another flight bound for Gatwick in early October the “fumes (were) reported to get worse” and the plane was diverted to Basel, Switzerland.

And when a fume event was reported on a flight into Heathrow, also earlier this month, the crew were later taken to hospital and then “medically discharged.”

There is no evidence to suggest these incidents are connected or emanating from the same cause.

British Airways says it always encourages staff to report any concerns and it passes reports onto the UK’s Civil Aviation Authority.

“Safety is our first priority and every report is thoroughly investigated, with typically 151 engineering checks before an aircraft is cleared to continue flying.”

The airline says fume events can be caused by “a wide range of issues, including burnt food in the oven, aerosols and e-cigarettes, strongly-smelling food in cabin bags, and de-icing fluid.”

But the issue of fume events is by no means confined to UK airlines.

Judith Anderson from the US Association of Flight Attendants says she gets a report of a fume event almost every day.

After an incident on a flight with a US airline in July, one crew member was hospitalised for eight days and another for three days.

“The one that was hospitalised for eight days developed a speech impediment. She couldn’t communicate properly, had severe headaches and cognitive issues,” says Ms Anderson.

Australian physician Dr Jonathan Burdon acknowledges that the effects of breathing in contaminated air on an aircraft are not “in the medical text books” and the symptoms can vary.

But Dr Burdon, who is also a respiratory specialist, says he treats hundreds of cabin crew and pilots every year.

“If I’d seen one or two patients over a number of years I might have thought, I’m not sure about that,” he says.

“But we’re seeing thousands (of cases) worldwide. And the thing is they are all chronologically-linked to a fume event.”

Both British Airways and EasyJet say they have been testing filters which could be retrofitted to aircraft and potentially prevent fume events from taking place.

However aviation regulators first need to certify the filters before they can be fitted to aircraft.