BA strike: Why are pilots walking out? 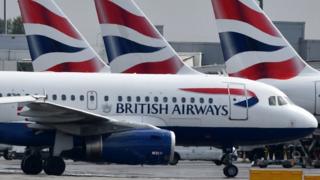 Pilots at British Airways are set for strike action on Monday and Tuesday disrupting thousands of passengers’ travel plans.

The vast majority of BA flights taking off from the UK have been cancelled on those two days, causing knock-on disruption. Passengers have been told not to turn up at the airport and to check the website for further information.

As well as affecting flights on Monday and Tuesday, there is a knock-on effect on flights before and after the strike, because planes and pilots are part of an intricate web and need to be in position for prior and subsequent journeys.

What is the strike about?

The British Airline Pilots Association (Balpa) said the strikes were a “last resort” born out of “enormous frustration” with airline management.

Pilots have rejected a pay increase worth 11.5% over three years, which the airline proposed in July. Balpa says that its members have taken lower pay rises and made sacrifices during the tougher times and now that BA’s financial performance has improved – its parent company IAG reported a 9% rise in profits last year – they should see a greater share of the profits.

BA says its pilots already receive “world-class” salaries, that pay offer is “fair and generous”, and that it if it is good enough for BA cabin crew, ground staff and engineers, whose unions, Unite and the GMB, have both accepted it, it should be good enough for pilots too.

BA says once the 11.5% pay deal has fully taken effect in three years time, the average BA captain would be taking home over £200,000 a year, allowances included.

While the average base salary for long-haul captains is already £167,000, the average salary for a co-pilot is significantly lower at £70,000. There are further variations according to length of service and the routes flown.

And at the other end of the spectrum the union says junior pilots starting out are paid a base salary of only around £26,000, although they receive several thousand pounds a year on top of that in allowances such as “flying pay” (payments for time away from base).

Pilot training can cost around £100,000 so junior cadet pilots are sometimes starting out with debts to pay off too.

How has BA prepared for the strike?

Two weeks ago BA informed customers they’d have to re-book their flights next week due to the planned industrial action.

Unfortunately, due to “human error” BA mistakenly sent emails to some customers whose flights weren’t actually affected, throwing BA’s customer service operations into a tailspin over the bank holiday weekend.

Since then BA has marshalled its resources to respond to a barrage of complaints and to keep as many passengers as possible on track to their destinations.

The airline said on Friday that the “vast majority” of affected customers had either reorganised their trips, had a refund or rebooked on alternative dates or with other airlines.

But the UK’s major airports are still expected to be untypically quiet at the start of the week with most of BA’s flights not taking off.

Flights on BA CityFlyer, SUN-AIR and Comair are not affected.

A further day of action is due on 27 September if differences are not resolved by then.

What rights do passengers have if their flight is affected?

BA advice says you can request a full refund, rebook your flight for another time in the next 355 days, or use the value of your fare to fly to a different destination.

If your flight has been cancelled due to a strike the Civil Aviation Authority says, passengers also have a legal right to a replacement flight at BA’s expense to get you to your destination, even if this means travelling with a different airline.

Most affected passengers would already have been in contact with BA, but they might not have discussed knock-on costs, such as airport parking. They should keep receipts for these extra costs, and BA said it would consider refunding them on a case-by-case basis.

The cost of separate hotel or accommodation bookings that cannot be used may need to be claimed from travel insurance.

Will the strike damage BA?

British Airways was inundated with tens of thousands of calls from angry customers when it sent out emails in August informing customers of cancellations.

Many passengers were anxious they would miss out on long planned family holidays and honeymoons and couldn’t get through to BA’s overloaded customer helplines. That won’t have done the brand any good.

The strike will cost the company in financial terms too. In legal papers filed back in June in an attempt to block the planned strike, BA suggested the strike would be likely to cost the airline up to £40m a day.

Financially BA’s parent company IAG is in a stronger position than in recent years. In 2018 IAG, which also owns Iberia and Aer Lingus, reported a pre-tax profit of €3bn (£2.8bn), which was 9.8% higher than in 2017. Profits have continued to rise in the first half 2019. However IAG shares have fallen more than 30% over the past year in a climate of global economic weakness.