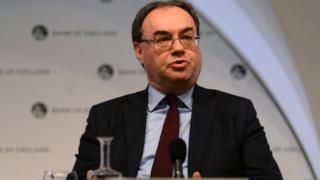 Andrew Bailey has emerged as the frontrunner to become the next Governor of the Bank of England.

An announcement by the Treasury, which is in charge of the appointment, could come as early as Friday.

If named, he will become the 121st governor of the Bank of England and will take over from Mark Carney who steps down on 31 January.

The search began in April and Mr Bailey was an early favourite for the job.

However, the FCA has faced criticism in recent months over the demise of the flagship fund of one of the UK’s best known money managers, Neil Woodford.

It has also been under fire for the collapse of investment firm London Capital & Finance, which went bust at the start of the year after taking £236m from more than 11,500 customers.

Why the Bank of England Governor matters to you

It may sound old fashioned to say it but the Bank of England Governor matters to you as much if you live in Northern Ireland, Scotland or Wales as if you live in England.

Whereas you’ll find the Bank of Scotland’s name on printed notes, the Bank of England doesn’t just do the same in England.

It supervises the financial system wherever sterling is the currency, seeking to ensure it is stable and no banks are running out of cash.

But its most important role is to try to control the cost of borrowing money by setting the official interest rate. That is likely to be a key determinant of the cost of real interest rates: your mortgage; your car loan or your business loan.

The governor chairs the Monetary Policy Committee which is a nine-person group of economists who decide whether interest rates should rise, fall or remain unchanged.

Raising them can help slow the economy down so it doesn’t overheat in the form of prices rising too fast. Lowering rates can help prevent the economy slowing down too severely by making it cheaper to borrow.

Because of the vast sums of money traded on the foreign exchange markets, traders listen obsessively to the governor’s words for any hints about where interest rates are going. Positive or downbeat comments can affect the value of the pound.

The governor must be careful about what they say – which means they’re not always the most exciting people to listen to.