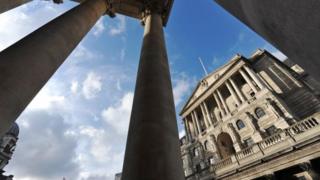 The City watchdog is to investigate a jump in the pound which took place shortly before the Bank of England’s interest rate announcement on Thursday.

The rise has raised questions over whether the decision to hold the Bank’s base rate at 0.75% had been leaked.

The Financial Conduct Authority (FCA) said: “We are aware of the incident and are looking into it.”

In December, the Bank referred to the FCA the leak of an audio feed of sensitive information to traders.

The value of sterling increased about 15 seconds before midday on Thursday, when the Bank’s Monetary Policy Committee (MPC) made its announcement.

The pound continued to rise following the announcement, although this was a smaller increase.

The FCA is the markets regulator. It does not usually look into “spot” currency trading, where one currency is traded for another for delivery on a specific date, but it can step in in certain circumstances. For example, if it affects other regulated markets.

Andrew Sentance, former member of the bank’s MPC, told the BBC’s Today programme that its nine members make a decision on the interest rate one day before it is announced.

He said: “There is confidential information circulating in the Bank for quite a long time.

“But it could just be something coincidental, so we shouldn’t jump to conclusions,” Mr Sentance added.

In December, the Bank admitted that one of its suppliers had “misused” an audio feed of sensitive information.

The Bank’s news conferences are usually broadcast via video, but there was also an audio back-up feed in case of problems.

This audio was available between five and eight seconds before the video feed, and was leaked to hedge fund traders.

This incident was also referred to the FCA, which is still looking into the matter. It has not launched a formal investigation into it.

After the MPC’s interest rate decision, data is published on the central bank’s website.

The Bank of England did not immediately respond to the BBC’s request for comment.