Bank of England ‘could cut rates due to Brexit uncertainty’ 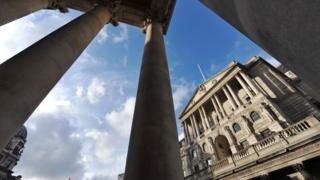 The Bank of England may need to cut interest rates should Brexit uncertainty persist, one of its policymakers has said.

Even if the UK avoids a no-deal Brexit, rates may still need to be cut, Michael Saunders said.

Last week, the Bank said Brexit uncertainty meant the UK economy was performing below its potential.

“If the UK avoids a no-deal Brexit, monetary policy also could go either way and I think it is quite plausible that the next move in Bank Rate would be down rather than up,” Mr Saunders told local businesses in Barnsley.

The pound dropped against the dollar after his comments were reported, trading down about 0.4% at $1.2277.

Mr Saunders, who is a member of the Bank of England’s Monetary Policy Committee (MPC), said that even without a no-deal Brexit, high levels of uncertainty surrounding the UK’s departure from the EU would persist and act as a kind of “slow puncture” for the economy.

“In this case, it might well be appropriate to maintain a highly accommodative monetary policy stance for an extended period and perhaps to loosen policy at some stage, especially if global growth remains disappointing,” he said.

At its last meeting on interest rates, the MPC unanimously held rates at 0.75%.