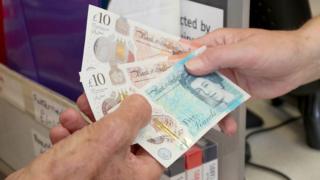 The Bank of England has kept interest rates on hold at 0.75% but indicated it may have to cut interest rates if global economic growth fails to recover or if Brexit uncertainties persist.

It said the UK economy was expected to pick up from its current weakness.

However, the Bank said it would monitor companies’ and households’ reactions to Brexit as well as global growth.

The Bank’s Monetary Policy Committee (MPC) voted 7-2 in favour of keeping the official rate on hold.

“If global growth fails to stabilise or if Brexit uncertainties remain entrenched, monetary policy may need to reinforce the expected recovery in GDP growth and inflation,” the committee said in a statement.

Growth of 0.3% in economic activity measured by gross domestic product (GDP) in the third quarter was “a little weaker” than the MPC expected at its November meeting, when members also voted 7-2 to keep rates on hold.

“Household consumption has continued to grow steadily, but business investment and export orders have remained weak,” it said.

The Bank’s analysis predicted growth of 0.1% in the fourth quarter – again, a weaker outlook than in its last meeting in November.

It now expects inflation to subside to 1.25% in the spring.

That largely reflected weakness in the construction sector, which has been contracting.

The Bank’s agents around the UK, who monitor activity, gave the construction sector its lowest score in 6.5 years.

The agents also highlighted falling manufacturing exports, with the automotive sector suffering one of the biggest declines.

The weak economy meant companies were unable to pass on higher costs in full to their customers even as their costs rose, squeezing profit margins.

“All sectors were affected, but margins were most squeezed in construction and consumer facing sectors,” the MPC said.

“For the latter, the pressure on margins was exacerbated by the shift towards online trading, higher business rates and the impact of increases in the National Living Wage on pay.”

That was one factor adding to weak investment. “Investment intentions remain depressed by slower global growth and political uncertainty.”

However, the MPC also said that if global growth did stabilise and Brexit uncertainties did not persist then the next move in interest rates may be up.

“Further ahead, provided these risks do not materialise and the economy recovers broadly in line with the MPC’s latest projections, some modest tightening of policy, at a gradual pace and to a limited extent, may be needed to maintain inflation sustainably at the target.”