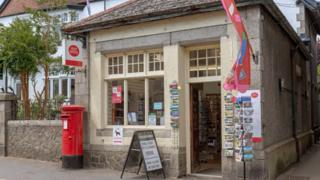 Barclays is facing criticism for opting out of part of the agreement banks have with Post Offices to allow customers to withdraw cash and deposit money.

The move is seen as a threat to efforts to provide services to communities that have seen branches and ATMs disappear.

Barclays will let its customers deposit money, but not withdraw cash from a Post Office counter using a debit card.

Consumer association Which? says it is a “shocking decision” which exposes the fragility of the UK’s cash system.

The Payment Systems Regulator, which oversees the cash system, warns it is “concerned about the impact”.

The Post Office has unveiled a new agreement with 28 banks and building societies, covering the three years from January and allowing for postmasters and post mistresses to be paid more to take in and dispense cash.

Barclays is the only one to exclude cash withdrawals from its part of the agreement.

Instead it says it will launch a cashback scheme at small businesses in remote towns and areas where there is no branch or ATM alternative within 1km.

It says it is “committed” to its relationship with the Post Office because customers will still be able to deposit cash.

She is calling on the bank to reverse its plan for the sake of people who still rely heavily on cash, saying: “The cash system that supports them must be cherished, not undermined.”

The Payment Systems Regulator says the decision “reduces the number of places their customers can go to get cash”, adding that it will be monitoring Barclays.

Which? has been concerned about a drift towards a cashless society. It is calling for legislation that guarantees consumers can continue to access and pay with cash for as long as it is needed.

The Post Office is clear that staff in its remote branches will get more money for handling banking transactions from January.

Barclays’ line is that opting out and finding alternatives will be more efficient.

It says that 99% of its customers who use the Post Office are in an area where a branch or free-to-use cash machine is available as well.