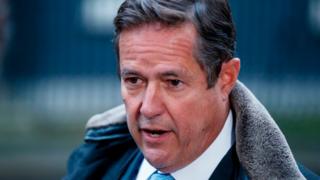 Barclays chief executive Jes Staley has the full confidence of the board, the bank said

The probe by the Financial Conduct Authority and Prudential Regulation Authority will focus on Mr Staley’s “characterisation to the company of his relationship” with Epstein.

Barclays said Mr Staley has the “full confidence” of the board.

Epstein died in a New York prison cell as he awaited his trial on sex trafficking charges.

The Financial Conduct Authority oversees bad behaviour in the City, while the Prudential Regulation Authority looks into financial stability.

Barclays added that Mr Staley said he had had no contact with Epstein since joining his current employer in December 2015. The bank added: “The relationship between Mr Staley and Mr Epstein was the subject of an inquiry from the Financial Conduct Authority, to which the company responded.

“The FCA and the Prudential Regulation Authority subsequently commenced an investigation, which is ongoing, into Mr Staley’s characterisation to the company of his relationship with Mr Epstein and the subsequent description of that relationship in the company’s response to the FCA.”

However, the news will be a fresh blow to Mr Staley who is trying to rebuild his image after being sanctioned for attempting to unmask the identity of a whistleblower at Barclays.

The bank was fined $15m (£11.6m) in the US and Mr Staley was fined £642,430 in the UK for breaching rules by attempting to find whoever raised concerns over an executive Mr Staley hired.

The bank received two letters in 2016 criticising the decision and raising concerns about the executive’s experience. Instead of being handed to the bank’s investigations team, one of the letters was distributed among senior managers, including Mr Staley.

In another embarrassing episode in 2017, Mr Staley fell for an email prank when a disgruntled customer pretended to be his boss at the time, former chairman John McFarlane.

Under his stewardship, the bank’s shares have lost 25% of their value. The shares were down more than 3% in early trading on Thursday as the bank reported that pre-tax profits for the year jumped 25% to £4.4bn.