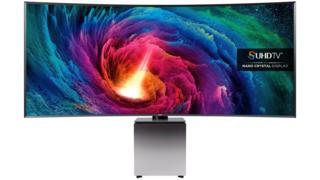 A software glitch is preventing the BBC’s iPlayer streaming service from running on many of Samsung’s smart TVs.

Affected owners are being advised to download a software update.

But the patch does not work on some older models, which will have to wait until next year to get a separate fix.

The BBC has said that it expects thousands, but not tens of thousands, of screens to be unable to use its catch-up service over Christmas as a consequence.

Samsung said the problem had been caused by “security certificates” expiring on Sunday. These are bits of code used to verify that the software on the TVs has permission to access iPlayer’s library of content.

The BBC said the South Korean firm was supposed to have provided a firmware update to its TVs before this happened.

The broadcaster limits its shows to certified equipment to help ensure that viewers get an acceptable level of performance.

“Samsung tell us they are working hard to address the problem with their firmware and any viewers who are experiencing difficulty watching iPlayer on Samsung TVs should contact the manufacturer to get it fixed,” said a spokesman.

Viewers first began reporting being unable to watch programmes via the service on Monday.

I have a Samsung UE32F5500 TV showing this message. I have done an update but the TV says there are no updates. I can log into iplayer on the TV and it lists the programmes but when I try to play a programme it shows an error message. How can this be fixed please? pic.twitter.com/5ekSjVl2ga

Samsung has advised that some TVs should start working again after installation of an automatic update, but that some owners would need to force the upgrade themselves via a settings menu.

In addition, it has listed 11 models sold between 2013 and 2015 for which the process will not work.

“We aim to provide an update for these models early in 2020,” it said.

Those affected face having to buy a third-party dongle or set-top box if they still want to make use of iPlayer on affected TVs in the meantime.

The issue arose weeks after the BBC announced that some of Samsung’s other equipment would stop working with iPlayer on a permanent basis.

“From Friday 6 December, BBC iPlayer is no longer available on some Samsung Blu-ray, DVD player and set-top box devices as they are unable to support the technical requirements needed to keep BBC iPlayer going,” it says on its site, which lists the models affected.

The BBC previously phased out access to some older LG TVs in 2018.