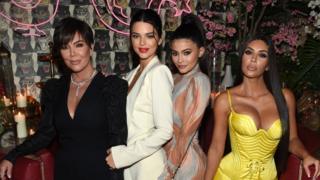 Kris Jenner, Kendall Jenner, Kylie Jenner and Kim Kardashian are among their family members to have gained global attention.

Three Instagram adverts for cosmetic fillers have been banned for suggesting that treatments could make them look like Kim Kardashian and Kylie Jenner.

The Advertising Standards Authority said the ads, which used pictures of the celebrities, had misled consumers.

It said consumers may have thought the packages would give customers lips, cheeks and a jawline that closely resembled those of the celebrities.

Instagram said the firm did not allow ads promoting Botox.

“In addition to our ads policies we recently introduced a new policy that restricts organic posts promoting the use of cosmetic procedures to over 18s,” the firm said.

The Instagram post for Beauty Boutique Aesthetics, pushed out in December, included a photo of US media personality Kim Kardashian with the text: “Many beauty technicians may be more than qualified, but always ask yourself, can they administer emergency drugs if the client has an adverse effect? The answer is no.”

The Advertising Standards Authority (ASA) said the salon had not provided evidence that staff could deal with an adverse reaction, and the post was therefore misleading.

Two other Instagram posts, one by beauty salon Queen of Aesthetics advertising the “Kylie Jenner Package” consisting of lip, cheek and jawline fillers, and another for Faces by AKJ Aesthetics, also for fillers and including an image of Jenner, were banned.

The ASA challenged whether the ads misleadingly suggested the package would give customers lips, cheeks and a jawline that closely resembled those of US media personality Ms Jenner and advertised a prescription-only medicine.

Queen of Aesthetics said it had not posted any ad that told their customers they could make them resemble Kylie Jenner, adding that it would be “almost impossible” for a customer to look like anyone other than themselves after a non-surgical cosmetic procedure.

Faces by AKJ Aesthetics said it used Ms Jenner’s picture because she was recognisable to their target audience and showed the areas that could be treated, rather than to imply that their treatment could make consumers look like her.

Cosmetic filler procedures can cost several hundred pounds, and should not be rushed into, according to the NHS.

“Some people look at a cosmetic procedure to solve life problems, or during difficult times in their lives,” the NHS advises on its website.

“Do not assume that a cosmetic procedure will make everything better.”

Kylie Jenner became a billionaire at 21 with her beauty business after gaining global recognition in her family’s reality TV show Keeping Up with the Kardashians.