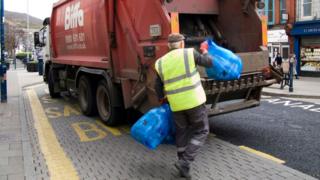 Biffa is the second largest recycling company in the UK

Waste management giant Biffa has been fined £350,000 for trying to send household rubbish to China as paper fit for recycling.

Biffa had claimed the bales contained 98.5% waste paper, which can be legally transported to China.

The Port of Felixstowe is the UK’s biggest container port

Shipping heavily-contaminated waste to the country has been illegal since 2006 because it is not part of the Organisation for Economic Cooperation and Development (OECD).

A three-week trial heard Biffa, which has its head office in High Wycombe, Buckinghamshire, was shipping a total of 10,855 tonnes worth £640,000 to the South China Sea coast.

However, the Environment Agency stopped any of the seven containers from leaving Felixstowe.

Prosecutor Sailesh Mehta said Biffa claimed its processes were “as good as it gets” when ideas such as employing more pickers or slowing conveyor belts were suggested.

The company said exports were checked by Chinese authorities, who had never complained, and clients could generate significant quantities of paper from the bales.

However, Judge Simon Auerbach said: “Exporting to non-OECD countries is the very essence of the offence and the willingness of the Chinese authorities to accept it and their ability to process it are not, in my judgment, the point.”

Richard Branwell, for Biffa, said its business model of exporting waste was vital to helping the government meet its recovery and recycling targets.