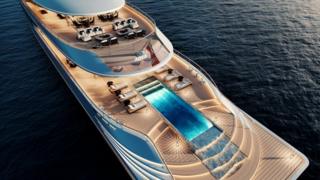 Billionaire Bill Gates has not commissioned a hydrogen-powered superyacht from designer Sinot, the firm has told the BBC.

It has been widely reported that Mr Gates ordered a £500m ($644m) luxury vessel, based on the concept which was displayed in Monaco in 2019.

Sinot said it had “no business relationship” with Bill Gates.

It added that that the concept yacht, called Aqua, was “not linked” to either him or any of his representatives.

“Aqua is a concept under development and has not been sold to Mr Gates,” a spokeswoman said.

She added that it was shown “in Monaco [and] meant to build a better future, and inspire clients and the industry.”

Bill Gates has been contacted by the BBC for comment.

The finished concept vessel would be 112 metres long, according to publicity material released by Sinot – although only a two-metre model has been built so far.

It would also be powered by hydrogen fuel – a relatively green alternative, compared with those that produce greenhouse gases.