Bitcoin: Should cryptocurrency owners make a will? 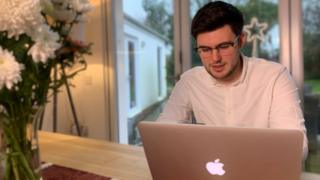 “I’m not thinking of dying at this age, but I think just making that as easy as possible for everyone is crucial.”

Jack Davies, 23, from Penarth, Vale of Glamorgan, wants to make sure the cryptocurrency he and his family own is accessible in the event any of them pass away. And with good reason.

Research estimates up to 3.8 million Bitcoin, worth up to $30bn (£22.8bn) today, has been lost, with much having gone to the grave with holders who failed to tell anyone how to retrieve it.

While some experts argue cryptocurrency is a risky and volatile investment, it continues to grow in popularity.

One Cardiff firm believes it has an answer to safeguarding it beyond the grave.

Coin Cover has created what it describes as one of the world’s first cryptocurrency wills, with CEO David Janczewski saying it is unsurprising some people have taken these assets to the grave up to now.

“Cryptocurrency is one of those odd things which is very private for a lot of people. If you acquired yours early, you might actually have a substantial amount of money. You might be worried about your personal security,” he said.

“And nobody thinks they are going to die. Nobody plans for that eventuality. And therefore, when that happens, maybe you haven’t told your family members exactly how they should recover it.”

The scheme sees people carrying an “indestructible” card which has information about their cryptocurrency, as well as others they give to their beneficiaries.

If the holder dies, their loved ones or an executor contacts the firm with a unique number on the card, along with a death certificate. Coin Cover then investigates and retrieves the funds.

Cryptocurrency is a type of money which is completely virtual, like an online version of cash which exists digitally.

While you can use some, such as Bitcoin, to buy products and services, not many shops accept it and some countries have banned it altogether.

Cryptocurrencies, such as Bitcoin, are basically computer files which are stored in a digital wallet on a smartphone or computer.

They can be sent between digital wallets, with every single transaction recorded on a list called the Blockchain.

Some people like the fact cryptocurrencies are generally not controlled by the government or banks. But is it secure?

While every transaction is recorded, cryptocurrency can potentially be stolen if a thief were to get access to a wallet. BBC journalist Monty Munford had £25,000 worth of Ethereum stolen after mistakenly storing his password in an email.

David King, a wills, trusts and estates lawyer at Harrison Clark Rickerbys solicitors, said an increasing number of clients – currently about two in 10 – count cryptocurrency among their assets.

His firm saw a case where the family of a client, after his death, believed he had owned Bitcoin but were forced to drop it because they did not have the information to access it.

“I think we, as private client lawyers, need to step into the 21st Century now and start recording that data when we are meeting with clients,” he said.

“One of the things that clients don’t like to do is to give away the access codes for this information.

“Whilst it’s secure and we as a firm of solicitors have a duty to the client to keep that confidential, naturally there is hesitancy from the client to give us that information. [But] I think we need to be smarter.”

There have been high-profile examples of cryptocurrency fortunes having been lost when the holder died.

Unfortunately for QuadrigaCX’s customers, Mr Cotten was the only person who had passwords to customers’ digital wallets. As a result, more than $135m in customer funds held in safe keeping was deemed inaccessible, locked on the blockchain forever more.

A University of Cambridge study in 2017 estimated there were between 2.9 million and 5.8 million active unique users of cryptocurrencies, although many argue the number has grown since then.

Also, 9% of 18 to 24-year-olds owned cryptocurrency and 7% of over-55s knew somebody who had bought cryptocurrency, according to a YouGov poll of about 2,100 people in November 2018.

Jack Davies, who works in the cryptocurrency industry, is one of the growing number of 18 to 24-year-olds who own some form of the digital currency used online.

He’s now considering drawing up a will to ensure his digital assets are passed on to the right people, if he should die.

“If I had enough to warrant it, I definitely would set one up. I think this is a really good first step in making these normal functions of money apply,” he said.