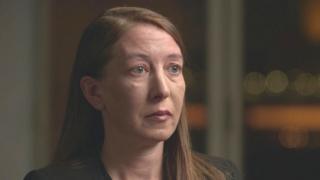 Amjad Rihan was a partner at the accountancy giant EY’s Dubai office. He also lost his job and hasn’t worked for more than five years.

They both say their lives were destroyed after they flagged up suspicious activity at a major gold refiner in Dubai – Kaloti.

A joint investigation between BBC Panorama and French media company Premieres Lignes shows they were right to be suspicious.

Anna and Amjad didn’t know it at the time but had stumbled upon evidence of an organised crime group using gold sales to Kaloti to launder British drug cash.

EY, Deutsche Bank and Kaloti have all denied any wrongdoing.

In 2013, Amjad was leading an audit into Kaloti’s supply chain for EY.

His team found Kaloti had weak checks on its suppliers – and was handing out extraordinary amounts of physical cash for gold.

“My team started conducting these audits and it’s really shocking what they were finding,” he said,

“Kaloti has done more than $5.2bn (£4bn) in cash in one year. Money-laundering 101 tells you not to use cash. Cash increases the risk of money-laundering.”

A few miles away, Anna, Deutsche Bank’s general counsel and head of compliance in Dubai, was getting suspicious about Kaloti’s cash too.

Panorama has seen a transcript of a Dubai court case in which she says “never before had I seen such a catalogue of suspicious circumstances”.

She told Panorama: “A colleague came into my office and described a call from a local bank in Dubai. Apparently they had called to ask, ‘Are these guys, Kaloti, are they good guys? Are we safe doing business with them?’ I was surprised. That’s very unusual.

“The guys at the bank had noticed that Kaloti had been withdrawing very large amounts of money, so large that they had to remove this physical cash in wheelbarrows.

“They said: ‘We can see that quite a lot of this money is being funded by a Deutsche Bank account.'”

BBC Panorama’s joint investigation with Premieres Lignes shows that cash from Kaloti was a crucial part of a $250m money-laundering operation which used gold sales to launder cash from British and European drug deals.

In all, 27 members of the money-laundering gang were jailed in France in 2017. The crime boss behind it, Nour Eddine Ech-Chaouti, remains on the run in Morocco.

Documents seen by Panorama show Kaloti bought 3.6 tonnes of gold from a company owned by a member of the gang in 2012 alone. The gold refiner paid the company $146m in cash.

The money-laundering could have been stopped years earlier if concerns raised by the two whistleblowers had been investigated properly.

Anna Waterhouse reported her suspicions about Kaloti’s cash withdrawals to the local money-laundering authorities. It was a decision that would wreck her life.

First, she told the Anti-Money-Laundering Suspicious Cases Unit at the Central Bank of the UAE. She says they didn’t investigate Kaloti – but turned on her and the bank instead.

“When I explained these very serious concerns, I was straight away met with the accusation that you must have done this. How else would you know? And of course it’s ridiculous,” she said.

“Why on earth would anybody run into the head of the Anti-Money-Laundering Suspicious Cases Unit to tell them that they’d laundered [money]? It’s absurd.”

“Neither regulator that I had reported it to actually seemed to investigate the suspicions about Kaloti, but each regulator started investigating the bank,” she said.

“That was the start of what became a very, very wide-ranging investigation which to me seemed like a giant fishing expedition, intended to find a problem of any sort within the bank. What I didn’t realise at the time was that I was also the focus individually of their investigation.”

The DFSA investigation found bankers in Deutsche Bank’s Dubai office had broken regulations in a separate case involving its private wealth division. No clients lost money, but the breach of the rules meant the bank, and its senior managers, faced serious sanctions.

The transcript of the Dubai court case suggests Deutsche Bank bosses sacrificed Anna and saved themselves.

It shows the managers discussed a plan to “offer up Ms Waterhouse” to “express settle everything for the bank”.

The bank escaped with a reduced fine and Anna was the only manager sanctioned by the DFSA. She’s now appealing through the courts.

“I’ve been a victim in all of this. It’s cost me my career. It’s cost me the last six years of my life. It has caused myself and my family untold suffering and nobody seems to care. They don’t even seem to have a conscience about what happened,” she said.

The DFSA said it had no part in any plan to offer up Anna Waterhouse.

It said there was ample reason to take action against her and the decision was made in good faith. It said it was not motivated by her decision to report suspicious activity.

Deutsche Bank told Panorama it disagrees with the depiction of its treatment of Anna Waterhouse.

It said this matter was thoroughly investigated more than five years ago by the bank, external advisors and the DFSA but it would be inappropriate to comment further because of the legal action.

The bank said: “We take our anti-money-laundering responsibilities very seriously and have taken extensive steps to further strengthen our controls.”

Amjad Rihan wanted to blow the whistle on Kaloti too – but says his EY bosses wouldn’t do it.

He said: “If you identify a suspicious transaction, you should report it to the authorities. What we identified was way beyond suspicion. Instead of reporting the crimes that I told them about, my bosses just covered them up.”

Amjad fled Dubai because he was worried that his attempts to blow the whistle on Kaloti could get him in trouble with the Dubai government.

He is suing EY, claiming he was ostracised and labelled a trouble-maker, then forced from his job by being pressured to return to Dubai.

He said: “Since I lost my career and I was pushed out from EY, I haven’t been able to earn much money. And it’s been really, really tough on us as a family financially. It’s been years in court, really in order for me to carry on with life, I try not to think about how tough it is.”

EY says Amjad has raised certain unfounded allegations in the court claim, which is being vigorously defended.

EY also says it is confident that all legal and reporting obligations have been complied with, and that it had delivered its findings to the relevant regulator in Dubai: “It was the work of EY Dubai that brought to light Kaloti’s non-compliance with the applicable regulations and ultimately resulted in the remediation of the issues.”

And it would “never knowingly enter into a trading relationship with any party… engaged in financial impropriety or criminal activity of any kind”.

It said cash payments were common in Dubai but it no longer buys gold for cash.

The financial system is supposed to keep dirty money out. But the two people who tried to blow the whistle about the suspicious activity in Dubai both feel they have been punished.

Anna’s dispute with the DFSA has now been going on for six years. If her appeal isn’t successful, she won’t be able to work in financial services or the legal profession again.

“Frankly, it’s changed me as a person because I find it extremely difficult to trust in authority or to trust in people,” she said

“I’ve been let down by so, so many people that I find it extremely difficult to trust anybody anymore.”