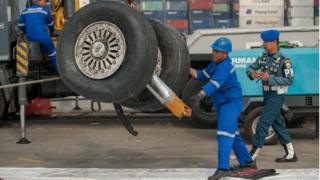 A series of failures led to the crash of a Lion Air Boeing 737 Max in October last year, which killed 189 people, an official report says.

Indonesian investigators found faults by Boeing, Lion Air and the pilots led to the plane crashing.

It also said the jet should have been grounded after an earlier fault, and that one of the pilots was unfamiliar with procedures.

The report found 31 pages were missing from the plane’s maintenance log.

The report, published on Friday, suggests that a crucial sensor, which had been bought from a repair shop in Florida, had not been properly tested.

Indonesian investigators have previously said mechanical and design problems were key factors in the crash of the Lion Air plane.

They highlighted issues with the aircraft’s new flight control system.

Boeing is under scrutiny over how much and when it knew about the problems.

The entire global fleet of 737 Max aircraft was grounded in March after the model was involved in two fatal crashes in five months.

Boeing has said it expects the 737 Max to resume flying before the end of the year.

What did the report find?

It showed there were incorrect assumptions about how the MCAS control system would behave and that the “deficiencies” had been highlighted during training.

In a statement responding to the report, Boeing said it was “addressing” the recommendations from Indonesia’s National Transportation Safety Committee.

The planemaker said it was “taking actions to enhance the safety of the 737 Max to prevent the flight control conditions that occurred in this accident from ever happening again”.

A preliminary report published in November last year said that the stick shaker – a warning device that alerts flight crew when their plane is at risk of stalling – was active throughout the flight.

Indonesian authorities laid out some recommendations for Boeing in the report, including that it redesign the MCAS and provide adequate information about it in pilot manuals and training.

Boeing is under pressure to explain what the company knew about the problems with the 737 Max and these questions were reinforced by recent revelations that employees had exchanged messages about issues with the MCAS as the plane was being certified in 2016.

In documents provided by Boeing to lawmakers, a pilot wrote that he had run into unexpected trouble during tests. He said he had “basically lied to the regulators [unknowingly]”.

All passengers and crew were killed when Lion Air’s Boeing 737 Max crashed after taking off from Jakarta in October last year.

Some five months later the 737 Max was grounded globally after an Ethiopian Airlines plane crashed, killing all 157 people on board.

Investigators into both accidents have focused their attention on the MCAS, which was designed to make the aircraft easier to fly.

The software reacts when sensors in the nose of the aircraft show the jet is climbing at too steep an angle, which can cause a plane to stall.

What has been the fallout for Boeing?

Boeing said this week it had developed a training update and that it expected regulators to allow the planes to return to the skies before the beginning of 2020.

The grounding of the 737 Max has taken a toll on the planemaker.

Profits more than halved to $895m (£687m) in the third quarter and the firm said it would cut production of its 787 Dreamliner, blaming trade uncertainties.

Boeing boss Dennis Muilenburg was also stripped of his title as chairman by the board earlier this month, but remains as chief executive.

On Tuesday, Boeing ousted Kevin McAllister, chief executive of Boeing Commercial Airplanes, making him the most senior official to leave the company since the two crashes.