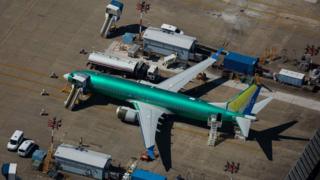 The release of a batch of internal messages has raised more questions about the safety of Boeing’s 737 Max.

In one of the communications an employee said the plane was “designed by clowns”.

The plane maker described the communications as “completely unacceptable”.

The 737 Max was grounded in March 2019 after two fatal crashes in Indonesia and Ethiopia, which killed almost 350 people in total.

Boeing said it had released the hundreds of redacted messages as part of its commitment to transparency.

The Federal Aviation Administration and US Congress were given unredacted versions of the communications last month.

One unnamed employee wrote in an exchange of instant messages in April 2017: “This airplane is designed by clowns who in turn are supervised by monkeys.”

Another message dating from November 2015 appears to show how the company lobbied against the aviation regulator’s calls for a certain aspect of simulator training.

“We are going to push back very hard on this and will likely need support at the highest levels when it comes time for the final negotiation,” the message said.

In February 2018, a Boeing worker asked a colleague: “Would you put your family on a Max simulator-trained aircraft? I wouldn’t.”

US House transportation committee chairman, Peter DeFazio – who has been investigating the 737 Max – said the communications “show a coordinated effort dating back to the earliest days of the 737 Max programme to conceal critical information from regulators and the public”.

The FAA said: “Any potential safety deficiencies identified in the documents have been addressed.”

But the regulator added: “The tone and content of some of the language contained in the documents is disappointing.”

Boeing added that some of the messages “raise questions” about the company’s interactions with the FAA around discussion about the simulator.

Boeing is redesigning the automated control system thought to have been the primary cause of the crashes.

The company has temporarily stopped making the 737 Max.