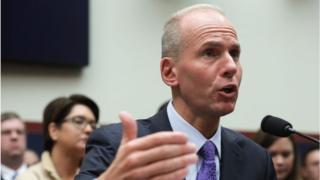 Mr Muilenburg recently faced US lawmakers who accused the firm of building “flying coffins” and engaging in a “pattern of deliberate concealment”.

But Mr Calhoun said Mr Muilenburg ‘has done everything right’.

Mr Calhoun, who took over as chairman after Mr Muilenburg was stripped of the role last month, told CNBC, the chief executive retains the confidence of Boeing’s board.

Last October, a Boeing 737 Max operated by Lion Air crashed, killing all 189 people on board.

Mr Calhoun said that the company does not have any plans to change the name of the 737 Max.

Since the grounding of the 737 Max fleet in March, Boeing said it is fixing the model’s software and has overhauled its review procedures.

In April, Boeing reduced production of the plane by almost a fifth.