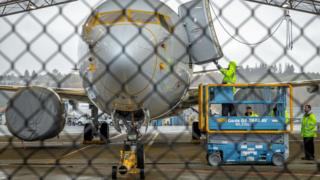 Boeing has reported its first annual loss in more than two decades as the 737 Max crisis continues to hit the firm.

The planemaker was forced to ground the aircraft, which had been its best seller, in March last year after two deadly crashes that killed 346 people.

Sales were worse than expected in the final three months of last year when the planemaker booked $17.9bn in revenues.

That was much lower than $21.7bn that had been expected by analysts.

“We recognize we have a lot of work to do,” said Boeing’s newly-appointed boss David Calhoun.

He replaced Dennis Muilenburg who was fired late last year following his handling of the crisis at the company.

“We are focused on returning the 737 Max to service safely and restoring the long-standing trust that the Boeing brand represents with the flying public,” said Mr Calhoun.

The cost of 737 Max crisis was thought to have reached around $9bn but Wednesday’s announcement suggests the final bill could be more than double that.

The return to service of the 737 Max has been repeatedly delayed. And last week, Boeing said it did not expect the fleet to return to the skies before the summer.

Boeing has been working on fixes to try to get the 737 Max planes back up and running.

And in an interview with CNBC, Mr Calhoun said he expected the firm would meet deadlines set by regulators.

Meanwhile, he said that – despite the two fatal crashes – he did not plan to rebrand the 737 Max.

The company had a total backlog in orders worth $464.4bn.

Boeing’s share price climbed on Wednesday, soaring by more than 4%.