Boeing: US regulator says ‘no timescale’ for 737 return 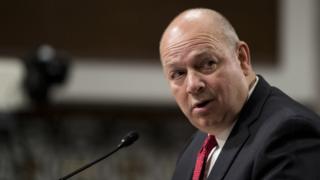 The man in charge of clearing Boeing’s 737 Max to fly again has said he will not do so until he has flown the plane himself.

Steve Dickson, head of the US Federal Aviation Administration (FAA), would not set a timeframe for allowing the plane back in the air.

The aircraft has been grounded by regulators around the world since March 2019.

It was banned from flying after two separate crashes killed 346 people.

Mr Dickson said on Thursday that he would fly the plane with his wife and children on board.

Last month, Boeing said it did not expect its 737 Max plane to return to the skies before July at least, which was longer than initially expected.

However, Mr Dickson did indicate that a certification flight could take place within the next few weeks. This is a necessary part of the “re-approval” process.

The news had sent Boeing shares up by nearly 4% part way through US trading.

Speaking to reporters at a briefing in London, Mr Dickson was critical of Boeing’s statements indicating that the aircraft would not fly again until July.

He said it was “not helpful” to be talking about specific timelines.

“For Boeing’s part, what I have been encouraging is to not be making public announcements, and instead focus on complete and fulsome submissions of data and proposals”, he added.

Mr Dickson indicated that although numerous issues with the Max had been resolved in the past few weeks, some concerns still needed to be addressed before a certification flight could take place.

They include issues with flight deck displays and a warning light, which he did not expect to cause a significant delay to the re-approval, as well as recently-discovered problems with the aircraft’s wiring, which could potentially cause a short circuit.

The issues with the 737 Max

On the wiring, he said the regulator had not yet received any proposals from Boeing on how it planned to resolve the problem.

In the wake of the two accidents involving the 737 Max, the FAA faced intense criticism over the way in which it delegated a large amount of safety work relating to the aircraft to Boeing itself.

But now, Mr Dickson made it clear, the FAA was working alone, saying: “We’re not delegating anything in this process.”

He denied that this was an admission that the FAA had been a victim of so-called “regulatory capture”. He said it was a necessary step to ensure the recertification process was “absolutely bulletproof”.

However, he did add that to carry on working in this way would be “unsustainable”, and emphasised that the FAA would continue to delegate safety work in future – although the way in which it was done would change.

Mr Dickson also conceded that the FAA needed to rebuild trust in its own performance as a regulator.

“That’s part of the reason why I’m going to fly the aeroplane”, he said.

“I think it sends a strong message of support for my workforce and for the integrity of the process, that I would fly the airplane, and put my own family on it.

“I think we owe that to the victims and their families – to ensure that when the aircraft is put back in service, that we are as diligent as we possibly can be.”

The grounding of the 737 Max, which had been Boeing’s best-selling plane, recently forced the planemaker into its first annual loss in more than two decades.

It said in January that it expects the bill for the grounding to surpass $18bn (£13.8bn).

Sales were worse than expected in the final three months of last year when the planemaker booked $17.9bn in revenues.

That was much lower than $21.7bn that had been expected by analysts.