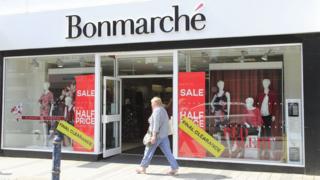 Women’s fashion chain Bonmarché has appointed administrators, putting the future of the business in doubt.

The chain’s 318 shops will remain open while a buyer is sought for the chain.

Bonmarché chief executive Helen Connolly said she had made the decision with “deep regret and sadness”, and blamed tough High Street trading conditions for the move.

The Yorkshire-based chain, which specialises in clothing for the over-50s, employs 2,887 people.

“We have spent a number of months examining our business model and looking for alternatives. But we have been sadly forced to conclude that under the present terms of business, our model simply does not work,” she added.

Ms Connolly said the firm had considered a refinancing or a rescue deal, known as a company voluntary agreement (CVA) with its landlords and lenders.

This is an insolvency process that allows a business to reach an agreement with its creditors to pay off all or part of its debts and is often used as an opportunity to renegotiate rents.

However, she said the firm had concluded that neither option would “fundamentally change the core challenges facing the business”.

“We are sadly no longer in a position to demonstrate to our shareholders that the business can continue as a going concern,” she added.

The struggling retailer warned earlier this year that trading had deteriorated.

UK billionaire and Edinburgh Woollen Mill Group owner Philip Day is the majority owner of the chain, with a 95% stake via his Dubai-based investment vehicle Spectre.

Spectre said: “We are disappointed with the result of our investment in Bonmarche, but our primary thought at this time is with the business’ employees and families.”

Administrator FRP Advisory said it had been appointed because the business was no longer able to meet its financial obligations.

It emphasised that trading would continue and no redundancies had been made.

“There is every sign that we can continue trading while we market Bonmarché for sale and believe that there will be interest to take on the business,” it said.

Bonmarché is the latest retailer to be hit by tough conditions amid growing competition from online retailers and higher operating costs, such as a rising minimum wage and business rates.

It has led to big names such as Toys R Us going into administration, while others such as Topshop-owner Arcadia, Debenhams and New Look have announced large-scale closures.