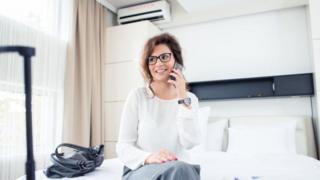 Booking.com is continuing to mislead its customers despite a crackdown by regulators, claims a new report.

The Competition and Markets Authority ruled this year that booking sites must review the way they rank and display rooms, over pressure-selling concerns.

An investigation by Which? says Booking.com is still giving false accounts of the popularity of rooms.

However, the site told the BBC it has “worked hard to implement the commitments” agreed with the CMA.

Which? carried out spot checks on six leading hotel booking websites, which were ordered to make changes earlier this year.

Offending sites had until September to alter their practices.

The sites had previously been found to be engaging in practices which included misleading discount claims, pressure-selling and hidden charges.

According to the consumer watchdog, five out of 10 of Booking.com’s “only 1 room left on our site” claims failed to give an accurate picture of availability.

The CMA, which first launched its investigation into online booking sites last October, sent warning letters to “a range of sites” in June, demanding they review their practices to make sure they are fair, and comply with consumer protection law.

Despite the move, Which? Travel’s Naomi Leach says consumers are still being pressured into making bookings.

“We found clear evidence that Booking.com has not yet sufficiently cleaned up its act and is flouting the rules on pressure-selling, which could lead to millions of consumers being rushed into making a booking,” she said.

“It must now provide cast-iron guarantees that it won’t continue to mislead holidaymakers with these unscrupulous practices. Otherwise, the regulator will have to step in with strong action to bring it into line.”

A spokesperson for Booking.com told the BBC: “We work continuously to bring transparency, choice and value to travellers, constantly testing and improving the way in which we present our services online.

“We have worked hard to implement the commitments agreed with the CMA and maintain continuing collaboration and dialogue to inform ongoing enhancement of the consumer experience.”