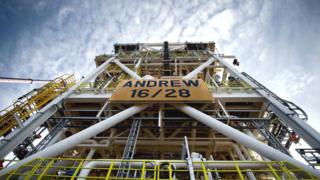 Premier Oil will take over the Andrew platform and BP’s controlling stake in five surrounding fields, as well as its minority stake in the Shell-operated Shearwater field.

A total of 69 staff on the Andrew assets are expected to transfer to Premier.

BP said the move was part of a “reshaping” of its North Sea portfolio.

The five fields all produce through the Andrew platform, which is about 140 miles (225km) north east of Aberdeen.

The Andrew assets comprise the platform itself, and the Andrew, Arundel, Cyrus, Farragon and Kinnoull fields.

BP also holds a 27.5% stake in the Shell-operated Shearwater field.

All five fields involved produce through the Andrew platform

This transaction is one of several similar moves over recent years, in which big oil firms move out of maturing oil fields and smaller firms move in.

Big firms, such as BP, are judged by the efficiency with which they deploy capital. Projects measured in the multiple billions of dollars tend to offer bigger returns at scale. So raising capital from older assets, to go after bigger projects around the world, tends to be attractive to shareholders.

The smaller firms are in a niche market, targeting smaller reserves, and searching out new deposits around existing fields, which they can extract without having to invest heavily in new kit. They’re being encouraged by the UK regulator, the Oil and Gas Authority, to maximise extraction.

The market in such asset sales has been lubricated by complex UK tax changes affecting liabilities for decommissioning equipment in the North Sea.

And such companies can only invest because they can secure the capital: this kind of transaction is seen as an encouraging sign of the financial health of this maturing “basin”.

A further consideration for big firms, with public reputations to defend, is the growing pressure to leave oil and gas under the seabed. Some oil majors are making strategic shifts into renewable energy.

“As a result of this focus, we have also now decided to divest our Andrew and Shearwater interests, believing them to be a better strategic fit for another owner.

“We are confident that Premier Oil, already a significant operator in the North Sea, is the right owner of these assets as they seek to maximise their value and extend their life.”

Premier chief executive Tony Durrant said: “These acquisitions are in line with our stated strategy of acquiring cash generative assets in the UK North Sea.

“We look forward to realising the significant long-term potential of the Andrew and Shearwater assets through production optimisation, incremental developments and field life extension projects.”

The deal is expected to be completed at the end of the third quarter of the year.