Brexit deal: NI firms must declare goods heading to rest of the UK 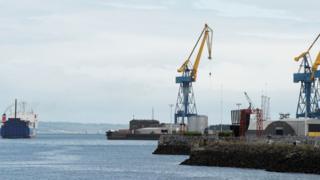 Firms in Northern Ireland will have to submit declaration forms for goods heading to the rest of the UK, under the government’s Brexit deal.

Brexit Secretary Steve Barclay was forced to make the admission after initially denying it was the case.

This followed previous assurances that Northern Ireland-GB trade would be “unfettered”.

DUP MP Sammy Wilson said it represented a “clear breach” of previous commitments made by the government.

Meanwhile, a government risk assessment has warned the new Brexit deal could mean a reduction in business investment, consumer spending and trade in Northern Ireland.

Giving evidence to the House of Lords Exiting the EU committee on Monday, Mr Barclay had initially said he did not believe exit forms would be necessary for trade between Northern Ireland and the rest of the UK.

1. The GB-NI border inside the UK will, from a commercial point of view, feel like a real border.

2. The Govt is trying to push through a vote on the deal before the text of the Withdrawal Bill is seen for a reason: the contents are alarming

But he later conceded: “The exit summary declarations will be required in terms of NI to GB.”

In December 2017, the joint report agreed by the UK and EU as they began Brexit negotiations stated: “In all circumstances, the United Kingdom will continue to ensure the same unfettered access for Northern Ireland’s businesses to the whole of the United Kingdom internal market.”

Under Boris Johnson’s Brexit plan, the whole of the UK would leave the EU customs union.

The UK will also leave the single market, but Northern Ireland would continue to apply EU rules relating to agricultural and other manufactured products.

The Democratic Unionist Party has already said it would not support the plan because it leaves NI subject to different rules than GB.

According to the government risk assessment, published on Tuesday, the costs of new checks and administration may affect the profitability of businesses trading to and from Northern Ireland.

“Due to data limitations around the number and nature of consignments of goods being moved from GB to NI, it is not possible to estimate the associated administrative burden on businesses,” it said.

It adds that HM Revenue & Customs has estimated that for trade between the UK and the rest of the world, the administrative cost of customs declarations ranges from £15 to £56 per declaration.

But it cautions that it may not be possible to translate the same estimates to GB to NI trade.

On the issue of exit declarations, the risk assessment states: “Some practical information will need to be provided electronically on movement of goods,” but due to “data limitations” it has not been possible to estimate the associated costs to business.

On Tuesday, the government is beginning the final process of trying to push its Brexit deal through Parliament.

MPs will be asked to vote on the legislation to implement Brexit – known as the Withdrawal Agreement Bill (WAB).

The 110-page document was published on Monday night and the government wants to get the entire bill through Parliament in three days.

If they back his deal, they will then be asked to approve an intensive three-day timetable in which to consider the legislation.

MPs have criticised the government for its proposed timetable, saying it is not long enough to scrutinise the details of the bill.

On Saturday, the DUP helped inflict defeat on the government by voting to delay Brexit until the WAB has been passed in Parliament.

Mr Wilson had said the party would also vote against the WAB in principle on Tuesday.

If the government loses Tuesday’s votes, it will be harder for it to meet its Brexit deadline of 31 October.