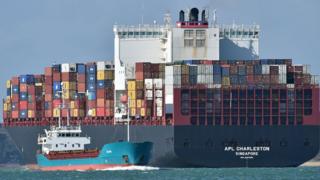 Post-Brexit trade deals will not make up for the economic damage inflicted on the UK from leaving the EU, analysis for BBC Newsnight has suggested.

They found that even combined, new tariff-cutting agreements were likely to boost the UK economy by just 0.4%.

The body said that moving from full EU membership to a simple deal with our closest trading partner – the objective enshrined in Boris Johnson’s Withdrawal Agreement – would depress the size of the economy by at least 1.8%.

A Conservative spokesperson said: “The prime minister’s fantastic deal makes clear that we will have a future relationship based on free trade and friendly cooperation. By striking trade deals around the world we will create exciting new opportunities for British businesses.”

The upshot from this analysis is that there is no realistic prospect of new trade deals with other countries, even the “ambitious” deals touted by ministers, offsetting the economic hit from Brexit itself.

Moving to an EU free trade deal and striking new free trade agreements with the US, Australia and New Zealand has an estimated negative impact on the UK economy of 1.4% in the UKTPO results – equivalent to £28bn, or £1,000 per household.

The UKTPO results show that moving to a free trade deal with the EU is beneficial overall for the UK agriculture and food processing sector, due to reduced competition from Continental farmers.

But that benefit is wiped out if US, Australian and New Zealand trade deals slash import tariffs and quotas, resulting in a surge of agricultural imports.

Mr Johnson, in a Commons statement presenting his Brexit Withdrawal Agreement deal on 19 October, stated: “For the first time in almost five decades the UK will be able to strike free trade deals with our friends across the world to benefit the whole country – including Northern Ireland.”

But Newsnight understands that internal UK government impact assessments show that, in fact, only the South East will benefit from US, Australian and New Zealand trade deals, and that the rest of the country will see negative consequences

Northern Ireland is, sources say, particularly badly affected due to its agriculture industry being severely hit.

The UKTPO used what is known as a partial equilibrium trade model to look at the likely impact on 148 individual UK industrial sectors of slashing tariff and non-tariff barriers.

Prof Michael Gasiorek led the modelling project for UKTPO. He was unsurprised by the results.

“It’s arithmetic,” he said. “Tariffs on many goods are already quite low or zero so there are no great gains from lowering them.

“Also relative to how much we trade with the EU, we do much less with the US, Australia and New Zealand, so the overall impact on output is not massive.

“It certainly doesn’t offset the negative impact of leaving the EU. Further, agreeing on the removal of regulatory barriers will be difficult – as the EU had found in its negotiations with the US.”

The UKTPO results are in line with the findings of a Treasury modelling exercise in 2018, which estimated the benefit of any new trade deals would only be between 0.1 and 0.2% of GDP – a benefit dwarfed by the negative impact of leaving the EU’s single market and customs union.

Newsnight understands the Department for International Trade has now completed fresh impact assessments of US, Australian and New Zealand trade deals, which show results similar to the UKTPO findings, but that these are not due to be published until after Brexit and ahead of the publication of mandates for trade negotiators.