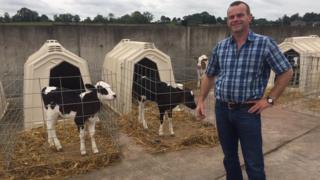 Dean Wright says the government is dragging its heels

At Dean Wright’s farm in Northern Ireland, the young dairy cows are mooing as they wait to be fed but he worries that a no-deal Brexit may limit his herd’s ability to earn its feed.

The milk from these calves will supply Dean’s cheese business, Ballylisk of Armagh, which sells its “triple cream” cheese over the border in Ireland.

And for that reason, the future for dairy businesses is far from certain, says Mr Wright.

He, like many food producers in Northern Ireland, fears that if the UK leaves the EU without a deal, it could have a severe impact on his ability to send his products across the border to the Republic of Ireland.

Food enterprises like his would face “potentially insurmountable challenges” from a no-deal Brexit, according to a joint report from the Chartered Institute for Environmental Health and the Food Research Collaboration.

“We have a highly-resilient food supply chain that is well versed at dealing with testing scenarios, which enables our consumers across the UK to have access to a wide range of sources of food,” a spokesperson for the Department for Environment, Food and Rural Affairs said.

But farmers that sell to the EU are worried that the paperwork that they would be required to provide after a no-deal Brexit would delay deliveries.

Some food businesses have said they could go out of business within three days of leaving the EU without an agreement, according to the report, leading its authors to urge the government to avoid a no-deal Brexit.

The problem is particularly acute in Northern Ireland because supply chains freely run across the border. Sometimes a product will cross the border several times during processing.

Sometimes a product will cross the border several times during processing

A quarter of all milk produced on Northern Ireland’s farms is exported for processing in the Republic of Ireland, the report notes.

After a no-deal exit, shipments of animals and animal products exported to the Republic of Ireland from Northern Ireland would need to have a so-called export health certificate (EHC).

The documents certify that produce meets EU food standards and must be signed by an environmental health officer or a vet for every consignment.

“Goods delivered without such certification would be rejected,” the report’s authors write.

But, they say, there are not enough inspectors to deal with the amount of agricultural goods that move across the border each day. And there is not enough time to recruit and train new ones.

The Department of Agriculture, Environment and Rural Affairs in Northern Ireland told the BBC it was “still assessing the needs of industry” but said it estimated there “would be a very significant increase in the number of EHCs needed” which would create “additional pressure on staff”.

Stephen Kelly, the chief executive of Manufacturing NI, told the BBC that officials had estimated that two million of the forms would need to be filled in and signed each year in the event of a no-deal Brexit.

Seamus Leheny, a policy manager for the Freight Transport Association, has said Newry, Mourne and Down expected the seafood business alone would submit a total of 60,000 EHCs each year after a no-deal exit.

Shipments will be held up, disrupting supply chains and leaving perishable goods to rot if there are not enough officials to sign the forms.

And it’s unlikely that vets would be able to step in and make up the expected shortfall in environmental health officers.

Simon Doherty warns about a shortage of vets

The British Veterinary Association’s Simon Doherty said there were not enough vets to cover increases in EHCs.

The CBI pointed to one Irish firm alone that estimated it would need 35 vets each day to certify the food it sends across the border. Mr Doherty said that was the equivalent to between 4% and 5% of all the vets in Northern Ireland.

In his office, dairy farmer Mr Wright thinks things could be moving a little more quickly. And he’s not alone.

Roger Pollen of the NI Federation of Small Businesses says, for his members, “concern really is ramping up about the fact that we rapidly reach the 31st October then suddenly have to scramble to get ourselves properly ready”.