Brexit roadshow: ‘My head’s about to explode’ 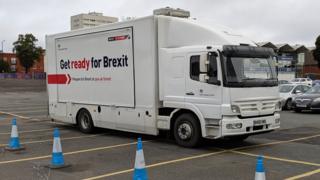 To prepare business for Brexit, a roadshow has been touring the country dispensing advice. Did it answer all the bosses’ questions?

The outdoor bars and marquees are being packed away outside Edgbaston cricket ground on a blustery September morning.

In their place a big white truck – property of Her Majesty’s Government – has parked up.

A slogan down the side says: “Get Ready For Brexit”. It’s the only sign that the government’s Brexit Readiness Roadshow is in town.

But inside the stadium civil servants from across government are setting up for a day of tackling tricky questions.

This is one of 25 events being held across the UK from Plymouth to Perth over the next few weeks. Businesses can come along and ask officials anything from the trivial to the technical as they try and get their heads round how to prepare for the UK leaving the European Union.

When I asked to tag along, the Department for Business Energy and Industrial Strategy said the events were closed to the media but I was welcome to wait outside and catch people on the way in.

So that’s what I did.

The first person I spoke to was Paul Dearn, a production control and logistics manager at Eley Hawk, which has been making shotgun cartridges since 1828.

“I was a bit astonished that this didn’t happen last time actually. That there was no local information available, he says.

“But obviously it seems that they’re taking it a bit more serious than previously.”

“I subscribed probably a few days ago to the gov.uk website and I think I’ve had something like 122 updates now, all of which mean not a lot because it’s just technical jargon,” says Anton Gunter, managing director at freight forwarding company Global Freight Services.

“A lot of people say you’re only preparing now – no, we’ve been preparing ever since 23 years ago we started trading internationally. There’s nothing that I’m scared of. It’s just a case of understanding how to protect our customers.”

Elizabeth Readstone, managing director at Intoco, a manufacturer and stockholder, says she wants to know how long it will take to get steel from Germany.

“I’m not overly worried about import costs,” she says. “I’m more worried about the impact of it going in and out, and how quickly. Are we going to have a car park on the M25? That’s where we’re at.”

Nick Foden-Ellis used to be in the army. Now he runs a pet travel business – they import and export people’s pets for them.

“Beyond that, with all the political shenanigans in Parliament, is it going to happen on 31 October? I’m not a betting man but I suspect not – but we have to be ready.”

“Is Brexit going to happen on 31 October?” wonders Nick Foden-Ellis

The UK is due to leave the EU on 31 October but Parliament has passed a law – the Benn Act – that says the government must seek an extension from the EU, rather than leave without a deal.

Businesses are unsure what outcome they should prepare for. The government is concerned about “Brexit fatigue”, where businesses simply can’t face any more meetings, action plans or policy changes ahead of Brexit.

These road shows and the huge public information campaign that’s gone alongside it – reportedly costing as much as £100m – are supposed to combat that.

So did they learn anything? Anton from Global Freight Services is one of the first out and slumps down on the sofa beside me.

“My head’s about to explode,” he says. “The information overload in that was intense. The message I’d like to get across to the government is just talk plain English.”

But he has learned something important. “Anyone who thinks the 31st is going to come and go, I think the government is certainly not portraying that. I think there’s an urgency.

“I’m going to go back to my customers and say ‘look lets prepare, let’s get it right. It seems like the urgency’s there from the government this time’.”

Paul from the shotgun cartridge maker Eley Hawk says the event was worth coming to.

“We found out some things we didn’t already know. We’ve got to read more and learn more I think – we’ve got to get things moving now. We import 90-odd per cent of our goods so it’s vital for us to be up to speed. It’s getting closer.”

Nick Foden-Ellis was one of the last to leave after some long conversations about pet passports, among other things. He only started his business six years ago.

“Even as recently as that we never sort of envisaged this kind of pandemonium,” he says. “But life as a small business owner is always challenging so you’ve just got to get on with it.”