‘Brexit uncertainty is harming my business’ 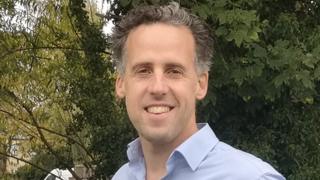 “If you were trying to design a way to close businesses like mine, you’d behave exactly as the government has done”.

Rob Tanner is on the cusp of winding up his 19-year-old business, SEA Oxford. He takes parties of Europeans – mainly teachers – sightseeing to some of the UK’s most popular tourist hotspots such as Stonehenge and Bath.

He says he’s seen the number of people taking his tours drop by a fifth in the past few years, which is not only affecting him, but the coach companies and host families he works with. He can’t go on any longer.

“At some point the uncertainty will level out – but we just don’t know when that will be and if it does recover we don’t know if EU visitors will return to the levels that they were at,” he said.

Frustration underpins his every word. Like many small business people, he wanted a decision to be made, and quickly. But it’s all come too late for his business.

He says the uncertainty is sending customers elsewhere.

“People are going to Malta and Ireland now to learn English because none of the details have been ironed out,” he said.

The Federation of Small Businesses says “the prolonged period of uncertainty” caused by the political stalemate has left small businesses like his “in limbo, with investment plans on hold and confidence low”.

In many ways, the debate going on in the business world is the same as in Parliament’s.

A snap poll carried out by the Institute of Directors (IoD) indicated business leaders were split on the issue of whether politicians should vote Boris Johnson’s deal through.

In the survey of 655 people conducted between 17 and 19 October, a small majority (55%) thought MPs should approve the deal, as opposed to 41% who thought the Commons should vote against it.

The IoD poll suggests that businesses want to avoid a no-deal and move towards either another referendum (30%) or a general election (24%).

The Food and Drink Federation – which is concerned about the impact of possible delays on the UK’s borders to fresh produce – welcomed the delay.

Chief executive Ian Wright said it wanted the extra time to scrutinise the deal, which was only published on Thursday.

“We shouldn’t allow the fact that the nation is exhausted to mean we sleepwalk into mistakes that will haunt the UK economy for a generation,” he said.

Most business groups say they want the threat of leaving the European Union at the end of the month with no agreement in place to go away.

The British Chambers of Commerce says they’d like to see an “iron-clad guarantee” on that front.

However, there are also those who say they just want a decision to be made – whatever the terms. A recent survey of clients by the accountancy firm EY found the majority believe Brexit is inevitable and “are desperate for clarity to the extent they’re now willing to accept no deal if that is what it takes”.

According to Stephen Welton, chief executive of the Business Growth Fund which funds high growth start-ups, businesses don’t have much time left to play with.

“At the moment we are stuck in increasingly circular and damaging debate,” he said. “One consequence is that business investment is slowing. We urgently need to redress that and a deal will be the catalyst to that.”

Mark Essex, director of public policy for KPMG, agrees the impact of a continued delay will mean damage to the UK’s economy – and frustration for companies.

He said: “There’s a pent up level of investment to be unleashed on things like infrastructure – decarbonisation – digital connectivity – retail. People aren’t sure what regulatory environment is going to be – would you make a big bet on that environment?”

Whatever the specific feelings about Saturday’s vote – there’s no doubt that three years on from the referendum – businesses still feel paralysed by Parliament.

A desire to see an end to uncertainty has been a unifying force over the past three years – and many still don’t see any clarity on the way forward.